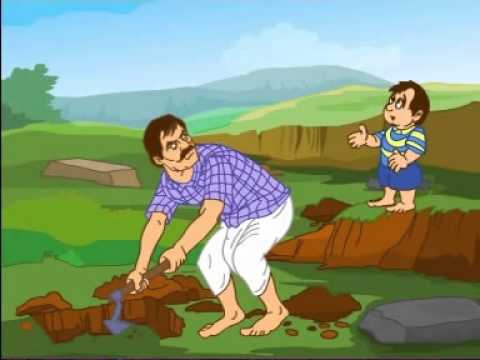 It is a very interesting story from the Jataka Tales. Once upon a time in a small village there lived a family of Ravi who had a young son and old father to take care. One day Ravi was helping his old father to sit in the bullock cart.

At that time his son  Vivek came out running from his house. He asked his dad “where are you taking my grandfather”? His father Ravi replied that “ I am taking him to a town”. So Vivek insisted that even he wants to accompany them. But Ravi called his wife and asked her to take Vivek away.

But Vivek did not agree he ran to the cart and sat next to his grandfather. Ravi with no other choice took Vivek along with him. They rode for quite some time and reached a grave yard.

Ravi got off the cart and told Vivek to stay with his grandfather and he would be coming soon. He then went to the graveyard and started digging. Vivek who was inside the cart became restless and went in search of his father.

Vivek saw his father and asked “Father what are you doing? Why are you digging? Even though Ravi was hesitant to answer his question, Vivek insisted him to answer why he was digging.

Ravi said” son it is a grave for your grandfather” .Then Vivek quickly said his father that “But grandfather is not dead” So Ravi replied “ Yes he has become old and useless and there is no use of him. And he won’t live for long period so no harm in burying now”

Sometimes elders don't understand the feelings of the kids. So Vivek also took a spade and started digging. His father Ravi wondered what Vivek was doing. So he asked  “What are you doing my dear son” ? So Vivek replied “ when you become old I will bring you here and bury you”.

Ravi became very furious and shouted at his son. He said “ how could you become so cruel and do this to me” ?  After hearing this Ravi understood his mistake and felt very ashamed for his work. He hugged Vivek and said “ you stopped me from committing a crime” Thank you my dear son.

Ravi also said sorry to his father and took him back home and took good care of him. Ravi told his wife that sometimes children are wiser than the grown ups.