Elephant and the Dog Story

Elephant and the dog story

It is a beautiful story from the Jataka Tales about the friendship between elephant and dog. Even the separation of the two could not take away their friendship. Read the story and understand the moral and values given in this story.

Once upon a time in the royal palace there lived a royal king.  The elephant was well fed and well taken care of as he was the most loved animal of the king. There was also a poor dog who was staying next to the elephant's shed. He was always fascinated with the smell of the royal food that was served to the elephant. Poor dog was not getting any nutritious food and hence it was very pale and skinny.

One day when the royal elephant was resting the dog could not resist the aroma of the  royal food and entered the elephant’s shed. Poor dog ate the sweet rice which was left over after the elephant had finished eating. Sweet rice was one of the favourite dishes of the dog. 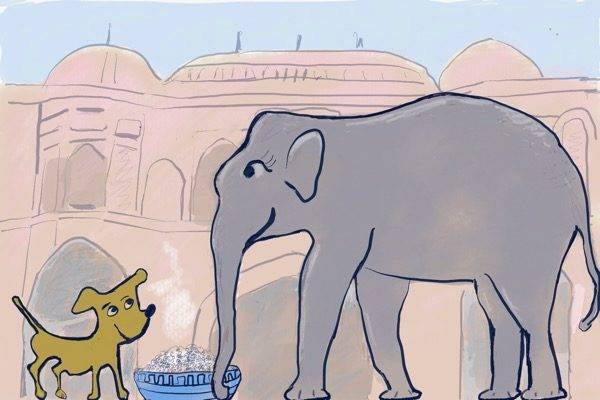 For a few days the dog did the same thing of eating the leftover food of an elephant. The dog too became healthy. As he became big and strong the elephant was able to notice him.

One day a farmer who was passing the shed saw the dog and asked the caretaker if he could sell the dog to him. The farmer offered a good price to the dog. Even though the caretaker did not own the dog still he sold the dog to a very good price.

The elephant became very sad after the dog left the shed. He did not eat any food and became very weak. He missed his only friend the dog a lot and hence stopped playing , bathing and even eating. The news of the elephants deteriorating health reached the royal palace and the king.

The caretaker then opened up and said that a dog was staying in the same shed and both elephant and dog had become very close friends. The caretaker further told the minister that he did sell the dogs to a farmer and doesn't know where he took him.

The dog ran back to the elephant’s shed. The elephant on seeing his friend became very happy and both started to play together. The king was very happy to see the elephant healthy. The minister was rewarded for his judgement and thereafter both elephant and dog lived happily together.