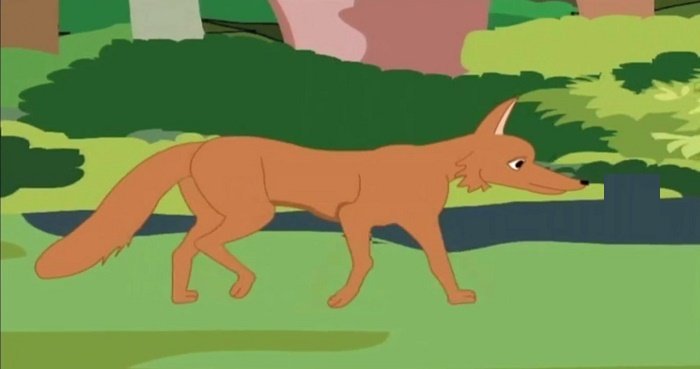 A classical story from Jataka Tales. Once upon a time from a small village some villagers thought of going for an excursion to the nearby forest. The next day they set out for the excursion packing all the bags with eatables, dresses and also a few other things.

After they reached the forest all of them were feeling very hungry. So they took out the eatables which they had got and started to eat. Soon all the food was over and they had nothing to eat for dinner.

They thought that they had come to the forest to enjoy the holiday and without proper food they cannot enjoy.  So one of the members in the group said “ Don't worry, I will get some fresh meat. We will  make a fire and roast the meat and have it for dinner”. It will also be very nice and we can enjoy the fire.

So saying the man took the club and went in search of animals. He went to the lake and lay down like a dead person and  thought that some animals would come to drink water. His plan worked and a group of wolves came near the lake to drink water. The wolves saw the man lying on the ground. They waited away for sometime to see if the man was playing any trick.

The King of wolves took initiative and said to other wolves that “please all of you stay here I will go near the man to check whether he is really dead or pretending. The cunning wolf came near the man and tried to pull the club from his hand. As he pulled the club the man tried to pull it back.

At once the king of wolves understood that the man was alive and was playing a trick. He ran off saying “ I understood your trick, you are not dead and just pretending to be dead so that you can kill one of us for your dinner”

The man quickly got up and threw the club on the king of wolves. But he narrowly missed it. He looked for other wolves but none of them were there and all had run away to nearby shelter.

The man was very angry and frustrated as he missed the animal and also he could not fetch any other animal for their food for dinner. The man went back to his camp empty handed. He said he tried to kill an animal with a plan but the cunning wolf played a better trick and saved the lives of other animals in his group.