The Sparrow and the Elephant

The sparrow and the Elephant:

A good moral story from Panchatantra tales. Once upon a time there was a sparrow living with her husband on a large banyan tree. Both the couple worked very hard to complete their nest on this tall tree. The sparrow couple were living very happily in their nest.

One day the female sparrow laid two eggs.  Both husband and wife were taking turns to sit on the eggs to keep it warm. They were eagerly waiting for the arrival of their babies.

But things changed one day. There was a wild elephant staying very close to the tree. He was very strong and would crush small plants and animals under his feet. All other animals were very scared of him and did not want to annoy him for any reason.

You can try reading more stories from the Jataka Tales here.

The elephant’s eye fell on the strong tall tree where the couple sparrow was living. He wanted to cut down the branches of the tree as it looked more  stronger than the elephant. The sparrows saw the elephant approaching their tree and were very scared and worried. 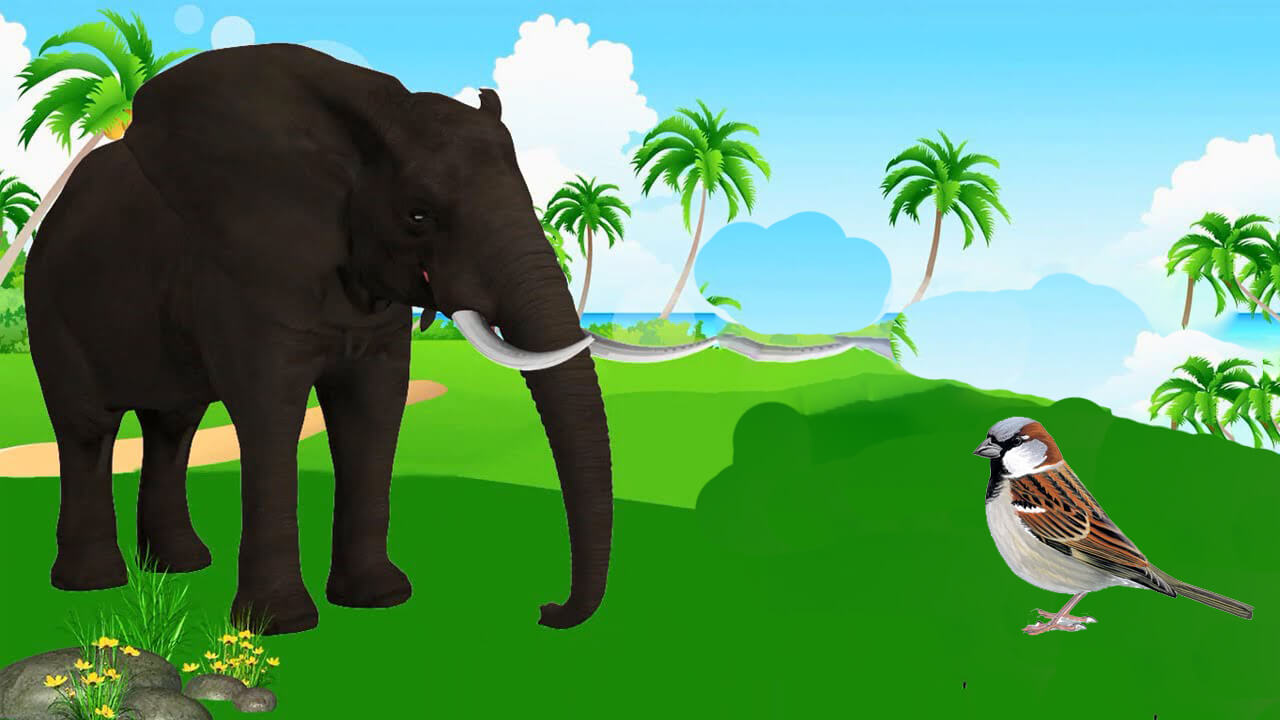 The elephant who was arrogant started to pull the branches of the tree. The tree was home for many other birds. The sparrow pleaded with the elephant  and said “ Oh mighty elephant please don't pull the branches. There are eggs in our nest and they might hatch any time now.

But the elephant did not pay any heed to the couple sparrow and pulled down the branches where the nest was there. The nest and the eggs fell to the ground  and the eggs were broken. The arrogant and careless elephant went away happily.

The sparrow couple were heartbroken on seeing their eggs broken. They wanted to take revenge on the elephant. The couple had good friends like crow, woodpecker, ants and fly. They went to their friends and narrated the whole story.

The sparrows asked their friends for help to take revenge on the elephant. All of them agreed for a plan and decided to kill the elephant.

The next morning the sparrows along with their friends went in search of the elephant in the forest. It was noon when they saw the elephant taking rest under a tree. So the fly entered the elephant’s ear and started humming a song. Listening to this the elephant felt dizzy and closed his eyes. Seeing this the woodpecker came and pecked both the eyes of the elephant with his sharp beak.

The elephant cried loudly with a lot of pain. He was baffled by the sudden attack.  The elephant was blind now. He wanted water to drink very badly. He got up and started towards the lake with his blind eyes to drink water.

Now it was the time of the frog to act. He started to croak loudly. Hearing this the blind elephant thought that he was very close to the lake and rushed in the direction of  the sound.

The frog was making noise from a marshy land. The blind elephant could not see this. As he went close to the sound, the elephant fell in the marshy area and was dead.

Thus the sparrow couple were happy to take revenge and thanked their friends for helping them.