This is another classical and intelligent story from the collection of Akbar and Birbal stories. Akbar was the famous Mughal king who ruled India for many years and Birbal was his favorite minister. Birbal was one of the nine gems of Akbar. Let us read this funny story: “The Loyal Gardener.”

One day Akbar was in a pretty bad mood. He went to his garden and was walking around the garden with some deep thoughts. While walking in the garden, Akbar stumbled and fell on a rock. He was mildly hurt. Akbar grew very angry and ordered for the execution of the gardener.

The soldiers searched for the gardener and brought him for execution as per the orders of the king. 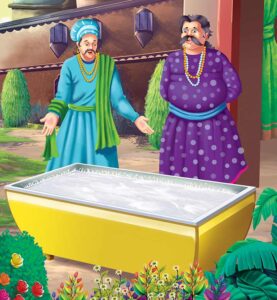 The next morning when the gardener was about to be hanged the minister asked if he had got any last wish before execution. The gardener replied, “ I want to be an audience with the emperor.” The emperor accepted his wish and thus the loyal gardener was brought to the court.

The gardener said, “ Can I come close to the emperor? As I would like to see him for the last time.”

He moved very close to the emperor. The emperor was happy to see him so close. The gardener cleared his throat and hugely stamped the emperor's feet.

Akbar became very angry and asked the gardener as to why he did such an act. The gardener replied, “My lord, I did this due to Birbal’s advice.”

Akbar asked Birbal why he asked him to do such an act?

Birbal replied, “My lord, I had no other option but to do this to protect you from criticism.  He is a very loyal gardener, and it was unfortunate that you fell on a rock. It was not the mistake of the gardener. Later after the execution of the gardener people may criticize you for such a heinous act.  To save you from such criticism the poor loyal gardener went out of his way so that people may not later accuse you of the mistake.”

Akbar realized his mistake and asked the soldiers to set him free. Akbar also rewarded the gardener for his honesty.