Long time ago there lived a pair of  crows along with their young ones in a huge banyan tree which was on the outskirts of a small village. Both husband and wife crow were very happy to see their small happy. One day all of a sudden a snake came and started to stay in the same banyan tree which had a small hole at the bottom of the tree.

The crows were very scared and not happy to see a snake in their place. But they had no other choice but to accept the snake in their tree. As the time passed the female crow laid eggs and the baby crows were born. In order to feed their babies both mama and papa crow went in search of the food leaving the young ones alone at home. 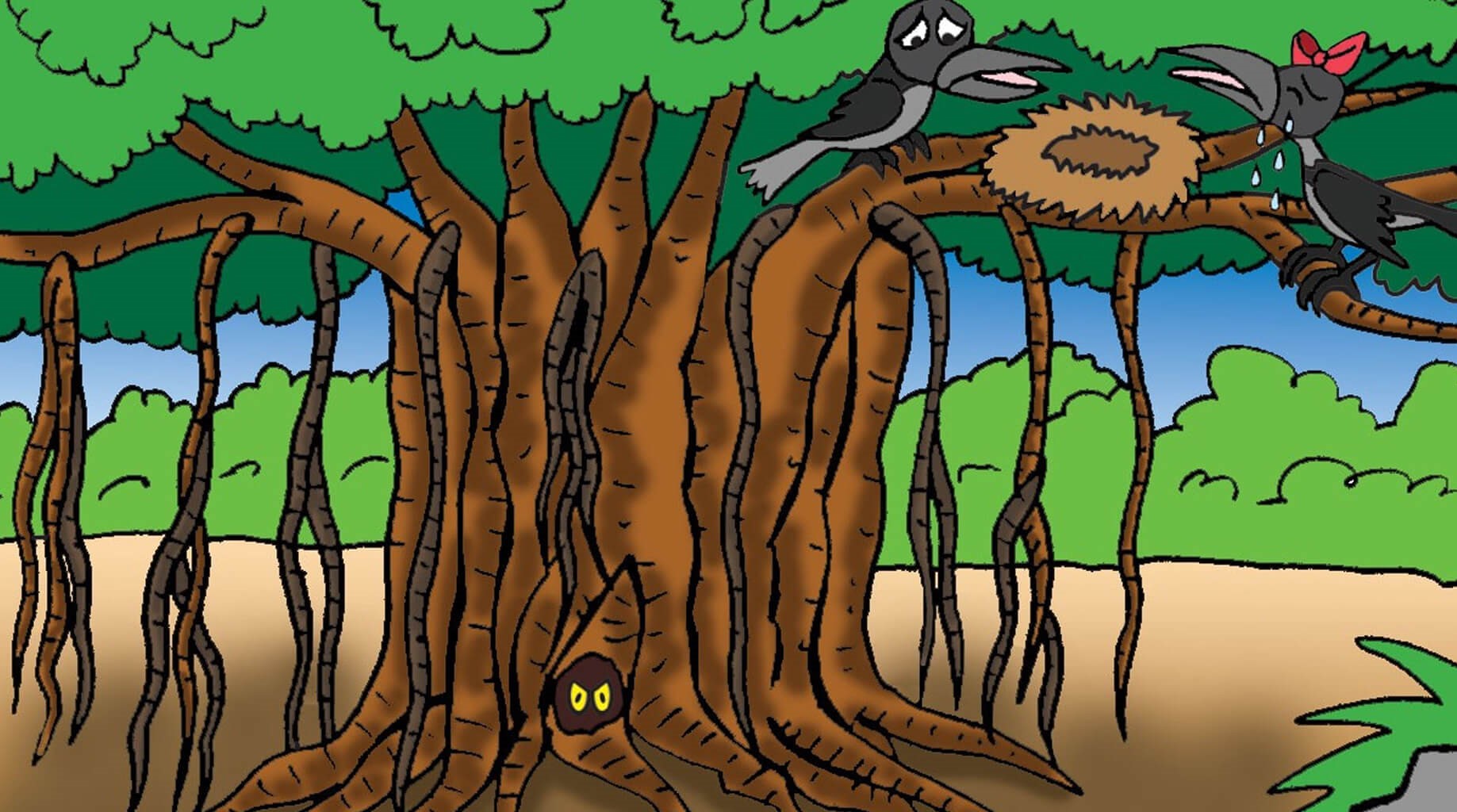 The snake on seeing this crawled to the nest of the crow and ate all the baby crows. Both mama crow and papa crow reached their nest  and were surprised and shocked to see baby crows missing. They searched everywhere but could not find their babies. They were very upset and sad.

Again after a few days mama crow laid some more eggs and they hatched into baby crows. This time mama crow said to her husband to go alone to fetch food and that she would take care of her babies.

Keep reading the crow and the serpent story

Mama crow was very upset that she could not protect her kids. This became a routine for the snake. Everytime mama snakes laid eggs the snake used to come and eat all the babies. The crows were greatly distressed and sad as they could not protect their kids from the monster snake.

One day with a heavy heart the female crow said to her husband that they should leave the tree and go to some other place.  The husband crow was reluctant to leave the tree as it was their home for many years now. He convinced his wife to give him some time to find a solution for this problem.

The husband decided to consult a wise fox for his advice on their problem.  Both husband and wife went to the fox. The fox was very happy to see his friend. But both the crows were looking dull and sad. So the fox asked “ what’s the matter? Why are you both sad?”

Both husband and wife explained their problem to the fox and asked him to help them. The fox thought for a while and said “ Listen to me and do what I say. Every morning the royal ladies come to take bath in the river which is very close to your tree. They take out all the ornaments and ask a guard to take care of those ornaments at a distance.

You just have to take one necklace and put it in the snake’s hole. You should make sure that the guards see you taking the necklace. In order to take the necklace they will kill the snake for the fear of being bitten.” The crows agreed for the plan and thanked the fox for his advice.

Next day morning crows did the same thing according to the plan. While trying to take out the necklace from the hole the snake came out of the whole  and hissed at the guards. The guards got scared and instantly killed the snake with the sticks. Both the crows thanked their dear friend fox for timely help. Thereafter the couple lived happily with their kids. The clever plan of the intelligent fox helped the weaker crows to kill a stronger enemy

Moral: Intelligence is greater than strength

Intelligence can overcome any hurdles.