The Stork and the Crab

The stork and the crab:

Another classical story from Panchatantra tales. We get to learn so much from each story. Here is another one which teaches us that greed is not good.

Once upon a time there lived a number of fish in a tank along with a crab. Next to the tank there lived a stork who used to eat fish from the tank whenever he was hungry.

Days passed and the stork was getting old. Now he was not having the same energy to catch a fish.

He was looking dull and sad and he had not eaten any food or fish for many days. The crab and the other fishes in the tank were worried and asked the stork why he was  looking so dull and sad. 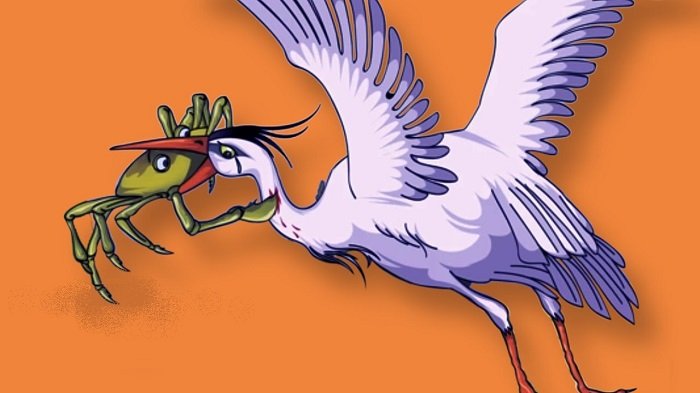 The stork who could not hunt and eat now  thought of a brilliant idea to catch fish and eat. The stork said  “ I heard that very soon this tank will be filled with mud and grow crops over it. I am very sad because all my dear fish friends, crab will die soon. I will also shift my base to a bigger tank which is nearby.”

Continue reading the stork and the crab

The stork was very happy as he succeeded in convincing the fish. He took a couple of fish in his beak and flew away. However instead of taking  them to a big tank he took them to a big rock and ate all the fish.

This frequently happened as and when the stork was hungry. Now only the crab was left in the pond. The old crab requested the stork to take him also to the big tank.

The stork was delighted as he always wanted to try the crab for his meal. The stork picked the crab in his beak and flew away. As he was travelling the crab was surprised as he could not see any big pond. All he could see was big rocks and bones of the fish.

“ Uncle, where is the big pond ?” asked the crab. So the stork replied “  you foolish crab can’t you see the bones of the fish. I have eaten all your friends and now it’s your chance.”

The crab without panicking thought how he could save his life from the stork. At once the crab dug his sharp claws into stork’s neck and did not let him go until he fell down dead. He then cut the stork head and dragged it to the pond where he lived and narrated the whole story to his remaining friends in the pond. All his friends applauded the crab for his bravery  and thanked him to save their lives.

Moral: Excess greed is not good