A good story from the Panchatantra collection. Once upon a time there lived a jackal called Chandrao  in the jungle. He was very hungry and searched for food in the whole jungle. But it could not find any food in the forest so the jackal decided to go to the nearby village in search of food.

While going to the village he was attacked by four stray dogs.  The stray dogs surrounded him and attacked him by barking furiously. The Jackal was scared, he did not know what to do. So he ran into a house which belonged to a cloth dyer and accidentally fell into a drum which was filled with blue water.

The dogs who were chasing the Jackal could not find him and went back keeping a sad face. After the dogs left the place, Jackal came out of the drum and saw himself in a mirror. To his surprise he had turned blue from toe to head. He went to the jungle and none of the animals were able to recognise him as the jackal had turned into a blue Jackal. 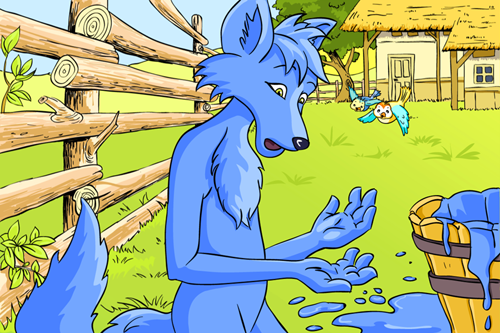 All the animals in the jungle held a meeting to understand What kind of animal is this? The Jackal who overheard this decided to take advantage of the situation. Standing in the middle of the jungle the blue Jackal shouted loudly and called other animals to that place. He said “ My dear friends please do not fear “ God has sent me here to take care of this jungle and the animals living here. God has sent me as your protector and king”

Everyone in the jungle believed him and were relieved from the fear. They were happy and bowed to their new king. All the animals said “Majesty your wish is our command”. Clever Chandrao assigned work to all the animals and chased away other jackals from the jungle as he was afraid that they might recognise him.

All the animals got busy with their respective work and lion hunted animals and served fresh meat to Jackal everyday. The animals would hunt and get the food to the self proclaimed king. In return the king would distribute the food equally among all the animals.

Hearing him all other animals were in surprise and anger. They realised that Jackal has fooled them. Later realising his mistake Jackal ran for his life. But he could not escape the anger of so many animals in the jungle. They tore him into pieces and chased him out of the jungle.

Moral: The one who abandons his own folk will perish