The Monkey and the Wedge

Monkey and the wedge:

In a large jungle there lived a troop of monkeys. Among all the monkeys one was very naughty and energetic. They lived happily in the forest by eating fruits and swinging on the trees and playing all around.

The monkey and the wedge

The monkeys watched these carpenters in fascination as they piled logs of wood. One day the carpenters began to cut a huge log. It was half cut and was lunch time. SO the carpenters placed a wedge between the half split wood and went to have their lunch. They placed the wedge so that it doesn't get closed.

As soon as the carpenters went to have their lunch the monkeys who were observing very keenly came to the place where logs were placed and started playing and jumping with the instruments.

Not knowing about this both carpenters after having lunch took rest under the tree. One monkey which was very naughty was very curious to see the wedge that was placed between the logs. The naughty monkey not understanding the consequences sat between the spilt logs and started to pull the wedge.

His friends who had come along with him started to cheer him so that he could take out the wedge. The monkey had not realised that his tail was between the split logs. All of a sudden the wedge came out and the tail got struck between the logs. 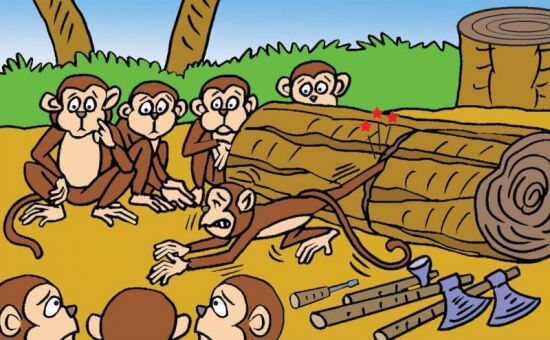 Poor monkey tried very hard to take his tail out and started to scream and cry loudly. Soon the workers came and saw the monkey being struck in the logs. They removed the tail of the monkey. But it hurt very badly and was crying in pain.  The monkey decided not to do any such stupid action again. The monkey walked back to his friends by keeping sad face.

All his friends consoled him and advised him to not to play with somebody's work. After few days the monkey had no pain and again started his naughty acts

Moral: Never meddle with others work

Don't poke your nose in other people's work.