The Hunter and the Doves

The hunter and the Doves

Panchatantra stories teach us how to lead a good life. Each story has its own moral. In this story we learn how staying united gives strength to everyone. The story also tells us that a good leader keeps his group united always.

Once upon a time  the flock of doves were flying high in the sky in search of food and water. Their king was leading them from the front so that his subjects were not falling into any trouble. 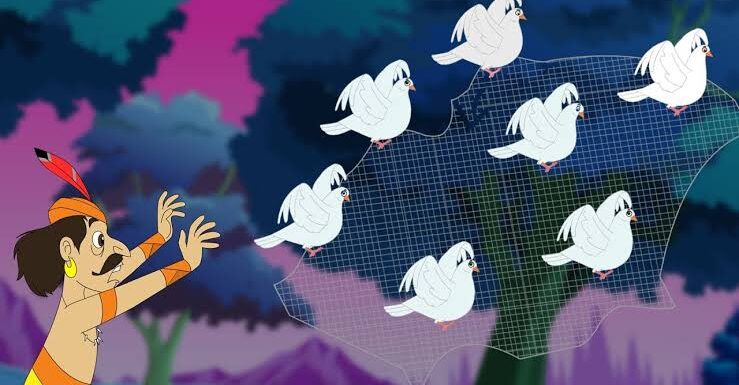 The flock of doves were very tired as they had flown for a long distance. The king encouraged his flocks to fly for a little more distance and then take rest.  One of the young doves moved  ahead of the king and saw some grains scattered under a banyan tree. He was very happy and informed his group about the grains. All the doves were very happy to see their food

Finally when the flock of doves started eating grains a huge net fell on them. All the doves were trapped in the hunters net. All the doves fluttered their wings and tried to move, but they could not.

Continue reading Hunter and the Doves

The hunter was very happy to see so many birds being trapped in his net. The king of the doves did not panic and thought of a plan to escape from the hunter. The king asked his fellow doves , “ My dear doves don’t be frightened.

We all can together save our lives from this hunter. We all should fly by holding the net in our beaks. Once we manage to fly high away from the hunter, later we can think of how to get rid of this net.”

Check out some of the other pages

Soon the doves flew over the hills. The king dove had a good mouse friend. They decided to go to him and set them free from the net. Hearing his friend's voice the mouse came out of the hole and said, “ My dear friend, Who did all this to you? How did you get trapped in the net.?”

The king replied, “My dear friend, we need your help. We are in great trouble, please help us.”  The king explained the whole story to the mouse. The mouse felt very sad for the doves and angry towards the hunter.

The mouse at once started to nibble the net around the king. However the king stopped the mouse and said, “ My dear friend, please set my fellow doves free first. No king can see his subjects in pain.

The mouse nibbled the net easily and freed all the doves. Then the mouse nibbled near the king and set him free. The doves were very happy and grateful to the mouse. All the doves thanked the mouse and flew away to another destination. If we are united then no one can trouble us or defeat us.