Panchatantra stories have morals and are easy to understand. It can be read by all age groups and just not required only for children. Here is another classical story from Panchatantra tales. Once upon a time there lived a tortoise  called Tom in a lake. He was very talkative and used to talk all day long. Two swans also lived in the same lake. The tortoise used to talk to anyone including from a tiny ant to a huge elephant. The tortoise and the swan became good friends.

One year there were no rains and drought occurred. Hence the lake in which both swans and tortoise  lived dried up and no water was available in any nearby lake. All the rivers and lakes dried up in the water. There was not a drop of water to drink for the birds and the animals. Many birds and animals died due to thirst and scorching heat.

Thus many animals started to move to other forests in search of water. The swans who were best friends of the tortoise decided to move to another lake. The tortoise felt very sad to leave the company of his best friends so he asked both the swans “Can i come with you?” 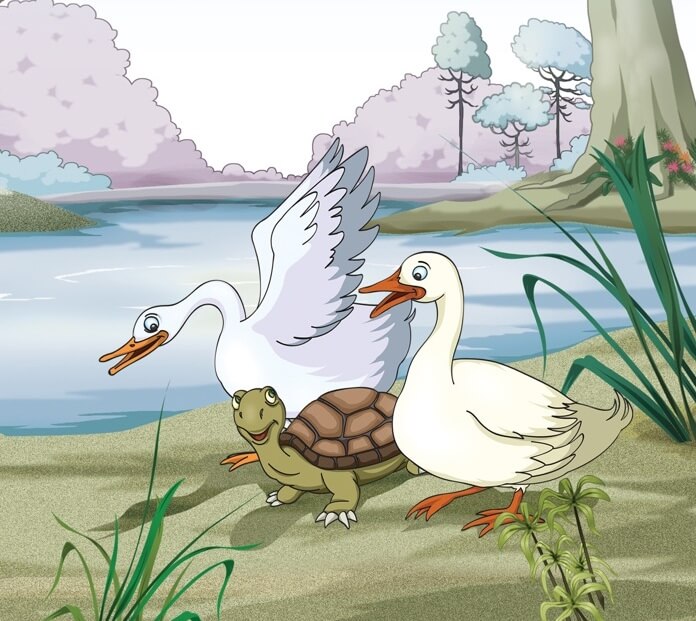 The swans agreed and decided to take the turtle along with them.  The swans told the turtle that “ we will hold the stick in our mouth and you latch in the middle of the stick from your mouth. But please don't open your mouth and talk. If you do that then you will fall down and die”. The tortoise understood and promised the swans that it would not open its mouth while in the air. But the swans were worried as they knew that the tortoise was very talkative and couldn't keep his mouth shut for a long period.

The three started their journey and the swans again warned the tortoise as not to open his mouth at any cost.  The tortoise was very happy to see the beauty of his land from the top. They crossed mountains and valleys. Everything looked tiny and even the huge elephants looked tiny from the top.

As the swans and tortoise crossed the village, the people in the village were very surprised. The villagers started to make weird comments. The tortoise was annoyed listening to the comments from the villagers.  Unable to control his anger and anxiety, the tortoise  opened its mouth without understanding the consequences. It fell straight on a rock and died. The turtle died due to its foolish behaviour. The swans felt very sad but they had no choice other than continuing their journey.

Moral:  Always listen to the advice.