The Frog and the Serpent

The frog and the serpent:

Yet another good moral story from the panchatantra tales. Once upon a time  in a small well in the jungle there lived king frog and with his relatives and disciples.

Some of the frogs were not happy with the way king frogs ruled over them.  Some of the evil frogs who wanted to become king tried to harm the king frog by misbehaving with him.

The king frog somehow with great difficulty managed to subdue the revolt but certainly the king frog was very angry against these revolters. He wanted to teach these evil frogs a lesson which they should have never imagined. 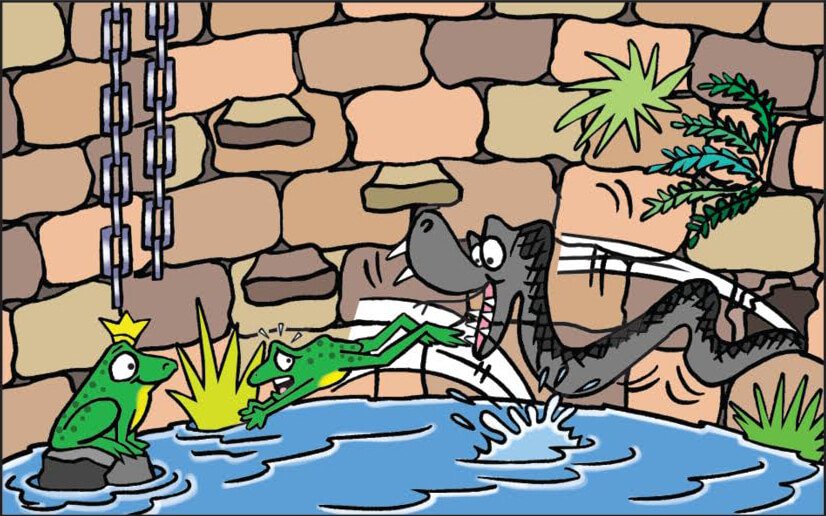 One day the king frog came out of the well and went to a  hole where a big black serpent was living. The king frog called the snake and said “ Hello my dear serpent, I want to make you my friend.”

The serpent was very surprised and said “ how can a serpent and frog become friends”. We are enemies as the serpent eats the frog.

So king frog said  “Listen to me serpent , I know serpent and frogs are enemies and serpent eats the frogs. But I have a plan . Please listen to my plan.”

So the serpent agreed to listen to the plan of the king frog. King frog said all about his evil relatives and the trouble they are giving him. He wanted the serpent to eat all the evil frogs. The king frog further said that “ I will take you to the well and show you whom to eat. You can eat all those except my family and me.”

The serpent was surprised and happy. He asked  “ Is it a dry well or filled with water.”

There is not much. But there is a hole just above the water level  where you  can go and take a rest  ” said the king  frog.

The serpent thought that “ without any struggle I am getting food to eat”  so I should  agree to help the king frog.

Few days passed and all the evil frogs were dead. Serpent had become lazy as he was used to getting food without any trouble taking. Now he was hungry. He went to the king frog and said “ I have eaten all your evil and rebel frogs and now only you and your family are left. I am very hungry. Now I will eat you and your family.”

The king frog realised his mistake and understood that his death is just around the corner. He realised that to punish his rebel frogs he made friends with his natural enemy.

King frog managed to keep his cool and said to serpent “ my dear friend you helped me when needed. There are many wells and ponds in this forest. I will manage to bring more frogs to come and stay in this pond. So you can eat them.”

The foolish serpent readily agreed to his idea and asked the king frog to quickly and bring some more frogs to this well.

So immediately both king frog and his wife came out of the well and hopped for their lives. They vowed never to return again to this well.

Moral : Stay away from the bad company