Another classical story from Panchatantra Tales. Once upon a time there lived a sage called Deva Sharma. He lived in a temple on the outskirts of the village. The sage was highly respected and many people visited him very day to take his blessings. They offered gifts, food, money and also garments for the sage.

The sage used to sell the gifts which were not of any use to him and became rich. The sage never trusted anyone and kept all the money in a bag and carried the bag with him all the time.

One day a fraudster saw the sage carrying the bag all the time. He thought that the bag might contain a lot of money.

After a few days, the fraudsters came to the sage and fell on the feet of the sage. He said, “ Oh sage I am fed up with this life. I want peace in my life. I got distracted from the right path. Please guide me to the right path in my life. Please accept me as your disciple and show me the correct path. I will do whatever you want me to do.” 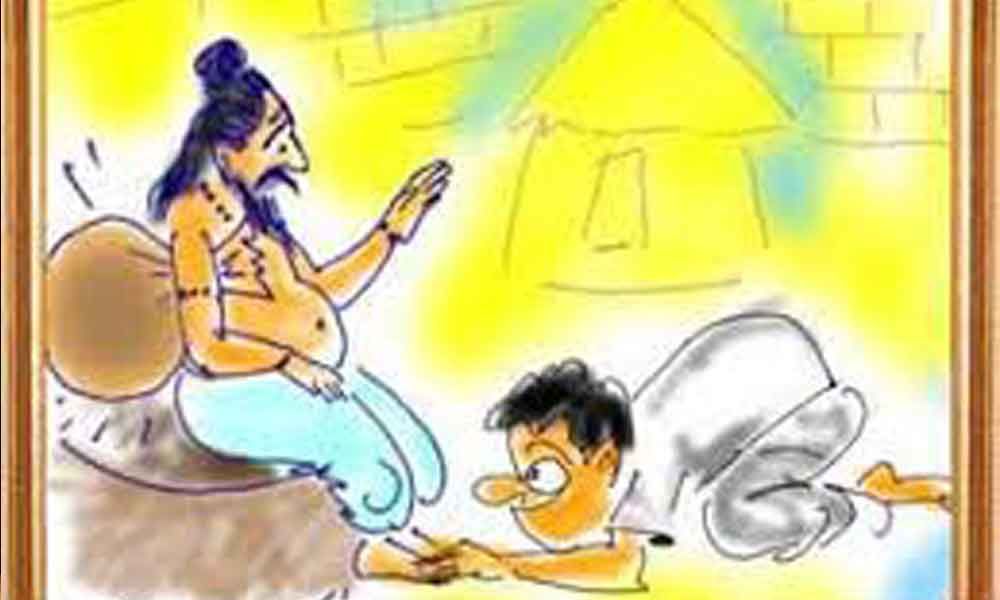 Pleased with his words the sage ideally accepted him as his disciple. The sage further said that  “ I meditate at night and want to spend alone. So you have to sleep in a  hut which is located at the gate of the monastery.” The fraudster readily accepted the offer.

Fraudster helped the sage in all the day to day activities and even messaged the hands and legs of the sage. The sage was very happy with his obedient disciple. Days passed and saw that the sage never separated himself from the bag. The fraudster was getting frustrated as days passed.

He thought of killing the sage with a knife. At that moment a small boy entered the temple to invite the sage for the thread ceremony. The boy was the son of the saint's followers. The sage accepted the invitation and started his journey to the village along with his fraudster disciple.

On their way to the village there came across a river. The sage thought of doing all the day to day chores and hence kept the bag in a shawl and tied a rope to it. He then asked the fraudster to take care of the bag until he returned.

As soon as the sage went inside the bushes, the fraudster ran away with the bag.  After the sage returned there was no bag nor the fraudster. The sage was shocked and anxious. He searched everywhere but was not able to find neither the fraudster nor the bag.

With great disappointment the sage returned to the temple empty handed the next day morning.

Moral:Do not believe the sweet words of unknown person