Another classical story from Panchatantra tales. Once upon a time there lived a person by name Adithya. One day he was travelling in the forest and felt very thirsty. He went in search of water in the forest.

He saw a well filled with water. He went near the well to drink some water but to his surprise he saw a man, a snake and a tiger trapped inside the well. The three requested Adhtiya for help and promised not to harm him.

Adithya was little apprehensive to take out the snake and tiger as he thought they may kill him after coming out. But the tiger and snake assured and promised him that they would not kill him.

Adithya who was satisfied with the promise threw a long rope inside the well and pulled the tiger. The tiger upon coming out of the well said “ Thank you my dear friend. If you come again to the forest please do visit my den. I would love to repay my promise” 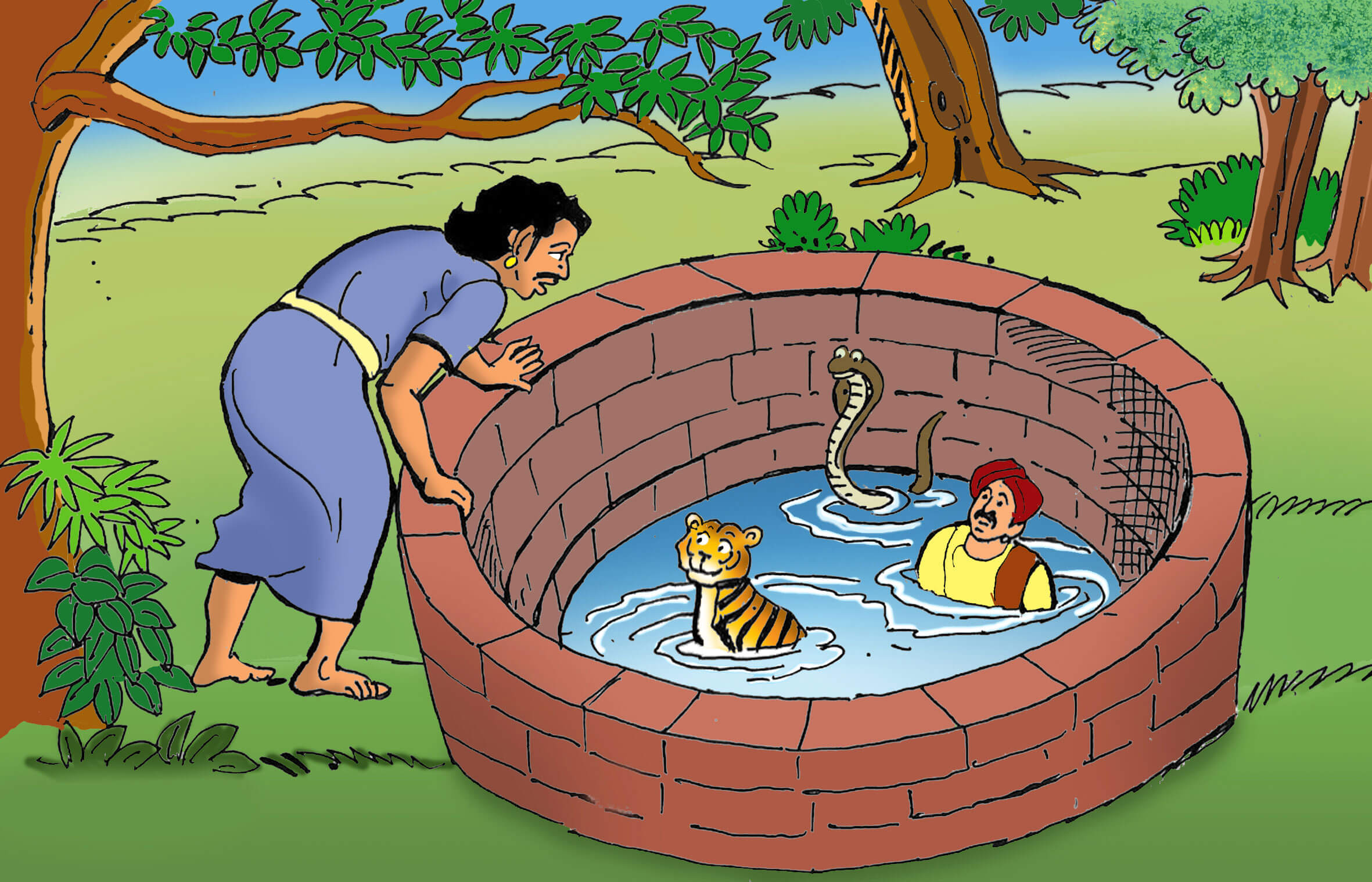 Next Adithya pulled the snake out of the well. The snake on coming out said. “ My dear friend, I promise to help you any time. Just call out my name and I would come for your help”.

Finally he pulled the human out of the well. The man after coming out of the well thanked Adithya and said that he is a goldsmith and would help him any time when required.

Adithya was very happy to make three new friends and went out of the forest. Few years passed by and Adithya was again passing through the same forest. He decided to meet his old friend tiger.

The tiger was very happy to see Adhitya in his den. The tiger upon greeting Adithya with warmth and love gave him fresh fruits and water to drink. Later the tiger gave him gold ornaments covered with precious stones. Adhitya decided to take the ornament to the goldsmith and make gold coins out of it.

Goldsmith was shocked to see the gold ornaments as he himself had designed and made the ornaments for the king's younger brother.

The goldsmith who was cunning thought to take the reward by giving false information about Aditya. Hence asking Adithya to rest for some time, the goldsmith went to the palace to meet the king. The goldsmith showed the gold ornaments to the king and said he found the culprit.

The king ordered the soldiers to immediately arrest the culprit and bring him to the palace.

Adithya who knew nothing was shocked to get arrested. The king refused to hear any reasons from Adithya and sent him to the jail. Not understanding what to do, Adithya called the snake's name loudly. Immediately the snake entered the jail and asked “ How are you my friend? Why are you in the jail?

Poor Adithya narrated the whole story to the snake and asked for his help. The snake promised to help Adithya and whispered a plan in his ears.  Next day morning news of the queen being bitten by the snake spread in the whole village. Queen remained unconscious even the best doctors could not do anything. The health of the queen was slowly deteriorating. The king announced a reward to anyone who could save the life of the queen

Aditya who was in the jail called the soldiers and informed them that he could save the life of the queen but on one condition. The king immediately called Aditya and asked him to save his wife. Aditya said that nobody should enter the room when he is treating the queen.

The king accordingly gave instructions to the guard that no one be present in the room except Aditya. He entered the queen’s room and whispered the snake's name. The snake came at once and took out the poison from the queen's body.

The queen got up and called for the king. Seeing her healthy king was very happy and asked Adtiya as to what he wants as a reward.

Aditya then said “ Oh King i don’t want any reward, I just want you to listen to my story”.  Aditya narrated the whole incident to the king. The king understood that he was not at fault and cancelled his jail term. The king further gave gold coins to Aditya and also punished the goldsmith for his lie.