The Monkey and the Crocodile

The monkey and the crocodile

This is one of the most interesting and commonly heard stories from Panchatantra tales. Let us again read this classical story.

Once upon a time in a jungle there lived a monkey and a crocodile along with other wild animals. The monkey lived on an apple tree next to the river. He was alone but was very happy. In the river there lived the crocodile. The tree was filled with juicy apples which monkeys used to pluck and eat the apples every day.

One day the crocodile came out of the river and took rest under the  apple tree. The crocodile was very tired and hungry as he could not fetch any food even after searching for the whole day. The monkey who was sitting in the tree wanted to speak to the crocodile to make him his friend.

The monkey called out to the crocodile to talk and asked if you are taking a rest under my tree? For this crocodile said “ my dear friend i am very tired and hungry so just came to take some rest here”

So the monkey offered the hungry crocodile juicy apples from the tree. At once the crocodile ate apples and thanked the monkey for giving him food. Soon both monkey and crocodile became good friends. Crocodile started coming to the shore everyday and enjoyed the juicy fruit and the friendship  of the  monkey. As time passed both of them became good friends and spent more time together discussing different stories around the world. 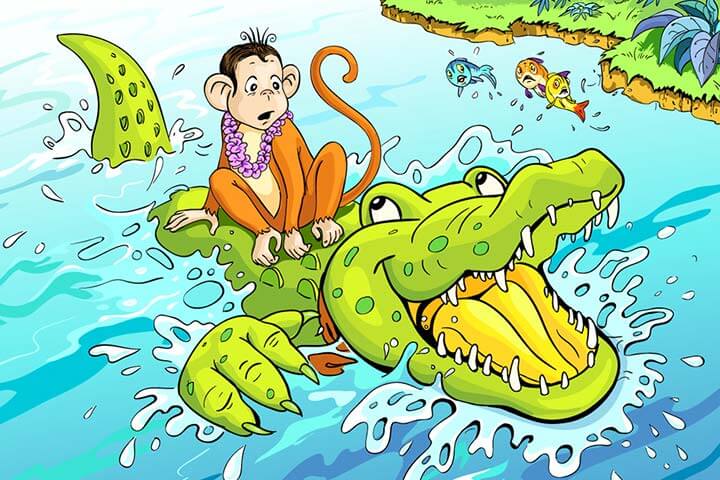 One day the crocodile took some apples home and gave his wife to eat the juicy apples and narrated the whole story about his best friend monkey.

The crocodile was shocked and sad to hear such words from his wife. He said “ My dear wife please don't ask for his heart. Monkey is my best friend and how can I kill him or cheat him?” Please ask for something else.

Interesting-- Read further the monkey and the crocodile

Crocodile’s wife who was stubborn said “ Until you get me the heart of the monkey I will not eat anything and will starve to death.” Crocodile who had no other option but to do what his wife wanted. Crocodile was very upset and all way he thought as to how he could ask his friend for his heart.

On reaching his friend, Crocodile said  “ My dear friend monkey, my wife has invited you home for dinner. She wants to thank you for giving such lovely apples to eat.”  Upon hearing this monkey was very happy and accepted the invitation immediately. But the monkey said “how will i come to your house as i don't know swimming.” For this crocodile said. “ My dear friend come and sit on my back. I will take you home.” It sounded like a good idea for the monkey and he readily agreed to it.

While reaching half way in the water, the crocodile revealed the real intentions of his wife to his friend monkey and asked him to excuse him for his mistake. The monkey felt very sad and thought of a plan to save his life. Monkey said to the crocodile “ Oh my dear friend you should have told me this early as I take out my heart and keep in the tree all the time. It is my privilege to honour your wife with my heart. But for this you have to take me again to the tree.”

The foolish crocodile at once agreed to take back the monkey to the tree. Crocodile was very happy when he heard the monkey agreeing to give his heart to his wife. He immediately took the monkey back to the tree and asked him to get his heart.

Monkey who was clever jumped to his home tree and said “ you foolish crocodile, I considered you as my best friend but you cheated me and wanted to kill me. Can anyone take out his heart and keep it in a tree. It was my trick to save my life. Now go and tell your wife that you are the biggest fool on this earth. Don't ever come near my tree again.”

Crocodile felt ashamed and very sad as he lost a good friend. Crocodile went back home and narrated the whole story to his wife.

A wise enemy is better than a foolish friend