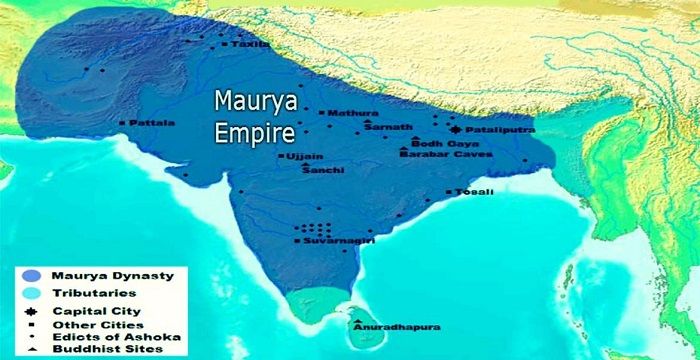 Even during his time Pataliputra remained as capital for the Mauryan Empire. Bindusara not only maintained the vast dynasty but also kept friendly relations with Greek rulers. Demiachus, who was a Greek of the Seleucid Empire, was the ambassador during the Bindusara period.

There is not much information about the life of Bindusara in the ancient and medieval sources. Some of the Buddhist sources which provide some details about Bindusara are Divyavadana,( It is dated to the 2nd century. It is a Sanskrit book of Buddhist avadhana tales)  Dipavamsa, Mahavamsa, Samantapasadika and also from the 16th century writings of Taranatha.

Some of the Jain sources which give us some details about Bindusara include Parishista Parvan (It is a poem written in the 12th century by Hemachandra) and 19th century Rajavali Katha by Devachandra. There are also some Hindu Puranas which also mention Bindusara.

Several Puranas and Mahavamsa attest that Chandragupta Maurya was the father of Bindusara. But according to Dipavamsa it is believed that Bindusara was born to King Shushunaga who was the founder of the Shishunaga dynasty.

According to Ashokavadana which is a Sanskrit text, Bindusara is the son of Nanda and also 10th generation descendant of Bhimbisara. Both the texts completely omit Chandragupta’s name.

Chandragupta Maurya had entered into a marital relation with Seleucids. This has led to various speculations that Bindusara’s mother could be a Greek or a Macedonian. But there is no proof to this theory.  As per the records of  Parishista Parvan, (It is a poem written in the 12th century by Hemachandra) Bindusara's mother is Dhurdhara.

The name Bindusara also has its own story. According to Buddhists and Jain texts Chanakya used to add a small quantity of poison to Chandragupta Maurya’s food to build resistance against possible poison attack on the emperor.  According to Buddhist legend, it so happened one day that Chandragupta Maurya was not aware of this and shared his food which had poison with his heavily pregnant wife.

Chanakya who had just then entered the hall realised that she would die. So, he decided to save the unborn. He beheaded the queen and took out the foetus from the womb. He kept the foetus in the belly of the goat which was killed every day.  After seven days Chandragupta’s son was born, and he was named as Bindusara as he was seen with drops of poison on his body.

The Jain text also has a similar version, but they say that a drop of poison had already touched the baby's head. Thus, Chanakya was named as Bindusara which means “the strength of the drop”

It is believed that when she was born an astrologer had predicted that her son would be king one day. According to Mahavamsa, Bindusara had 101 sons from 16 women of whom Ashoka and the youngest son Tishya were born to the same mother.

As she attained marriageable age her father took her to Bindusara’s palace at Pataliputra.  As she was very beautiful, Bindusara’s wives were jealous of her. They made her work as a royal barber.

Bindusara was very pleased with her hair dressing style. She expressed her wish to become queen to him. Bindusara was little concerned about her lower caste but when came to know that she was a brahmin he made her chief queen. The couple had two sons namely Ashoka and Vigatashoka. Ashoka went on to become one of the great emperors of the Mauryan dynasty.

Bindusara was an able ruler who not only maintained the vast territory but also expanded the territory further to the south.  According to the historian Upinder Singh, Bindusara was made the king around 297 BCE.  Different sources mention the vast empire he inherited from his father and also about his own conquests.

According to K.  Krishna Reddy, if Bindusara had extended his kingdom to Deccan, then certainly there would have been some mention of it in the Ashoka’s inscriptions. As there is no mention in the inscriptions, he believes that Mauryan Empire extended only up to Mysore during Bindusara’s reign.

Most of the southern rulers   had friendly relationships with the Mauryan Empire. Another historian Sailendra Nath Sen and Alian Danieiou believe that Mauryan Empire had already extended to the south of India during Chandragupta Maurya period. They believe that he just inherited the empire which already had the Deccan region in it. They further say that Bindusara only consolidated the territories acquired by Chandragupta Maurya.

Ashoka was appointed as viceroy of Ujjain. He was sent to Taxila to put down the revolt which was started by the people against the wicked ministers. Bindusara did not provide any weapons to Ashoka to complete his task in Taxila.

Ashoka went to Taxila, and the people of the city welcomed him. The people explained that they are not against Ashoka or the emperor but oppose only the wicked ministers who insult them. Thus, Ashoka had no opposition to enter the city and he was welcomed by the people whole heartedly. There was another revolt in Taxila after the death of Bindusara.

According to historical sources, Bindusara died in 270 BCE. However, different historians are giving different dates of his death like Upinder Singh gives as around 273 BCE, Alain Danielou believes Bindusar died around 274 BC and Sailendra Nath Sen believes that he died around 273-272 BCE. Later his son Ashoka succeeded his father and ruled the kingdom from 268 BCE to 232 BCE.

Mahavamsa says that Bindusara ruled for 28 years while some puranas say that he ruled for 25 years. Mahavamsa further says that when Ashoka heard of his father’s ill health, he killed all his 99 brothers and became the emperor.

After the death of Bindusara his son Ashoka became the emperor and expanded further the Mauryan Empire. Ashoka is considered as one of the greatest rulers of the ancient period.