Chandragupta Maurya was the founder of the Maurya dynasty in ancient India. He, with his teacher Chanakya, expanded the Mauryan kingdom and conquered most of North India.

He is a very powerful and strong king in the history of India. Chandragupta Maurya with the help of Chanakya defeated the last Nanda emperor Dhana Nanda and laid the foundation for the Mauryan Empire.

He ruled from 324 BC to 297 BC. Under his rule, Chandragupta Maurya unified most of India under one administration.

He continued expanding his kingdom till he renounced the power to follow an ascetic life.  Chandragupta Maurya became a follower of Jainism.  He turned into a Jain monk after ruling nearly for 23 years. He performed Sallekhana which is a ritual of doing fast until death and willfully ended his life. 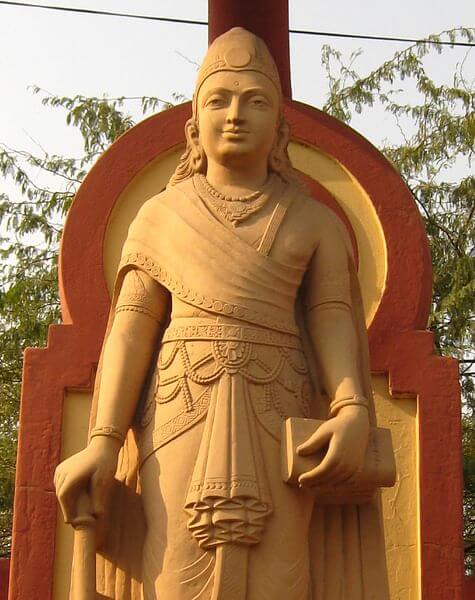 Much of the Chandragupta Maurya birth is debated and each text differs significantly in their opinion. Most of the information about his ancestry and his life come from ancient texts of Greek, Jains, Buddhists and Hindu texts.

The Hindu text does not provide any details of Chandragupta's ancestry. Some historians believe that Chandragupta was born to Nanda’s wife Mura. However, some consider Mura as a concubine of the king in the Nanda dynasty.

Another Sanskrit play called Mudrarakshasa narrates the ascent of Chandragupta to power. It is a Sanskrit play written by Vishakadatta. In this play they use the word Kula hina which means not coming from a decent family.

According to most of the Hindu sources Chandragupta Maurya came from a humble background and with the help of Chanakya he emerged as a powerful ruler. He is also called as son of Sudra in the same play. But it has been denied by many historians.

According to the Buddhists text Mahavamsa, it describes Chandragupta Maurya as a Kshatriya. Various Buddhists sources are of the opinion that the family spread out to escape ill treatment from the king of Kosala Kingdom. They further claim that Chandragupta's ancestors moved to Himalayan kingdom which was known for its peacocks.

They believe that Chandragupta belonged to the Moriya clan of Pipphalivana who descended from these peacocks. These sources also mention that with the help of Chanakya, Chandragupta became king at Pataliputra.

There is also no clear evidence on the date of his birth.  From his childhood Chandragupta Maurya was a very ambitious and courageous person. According to Jain monks it was believed that Chanakya would help someone to become an emperor and would be the power behind the throne.

They slowly started conquering many small states and moved towards the Nanda Dynasty to dethrone Dhana Nanda and start the Mauryan Empire. He was finally defeated, and Chandragupta Maurya made Pataliputra as capital of the Mauryan Empire.

Around 4 century BCE India was under many kingdoms.  The important kingdom at that time was the Magadha Kingdom.  It was a nucleus of bigger dynasties like the Haryanka Dynasty, Shishunaga Dynasty and Nanda Dynasty. The supremacy of Magadha reached during the Nanda Dynasty.

Also, with the death of Alexander the Great in Babylon in 323 BC, Chanakya and Chandragupta Maurya took advantage of the time and overpowered the Nanda Empire. Thus, the Mauryan Empire was established.

Chandragupta Maurya was a very ambitious and courageous person. He took bold steps for conquering other states and also for the development of the state. According to the Meghasthanes it is believed that both Alexander and Chandragupta Maurya met and could have obtained the permission to learn the Macedian way of warfare. However, this has not been mentioned anywhere else.

He then defeated the Macedians' satrapies in the northwest region of the Indian subcontinent. He thus freed the Indian territories from the Greek and appointed Indian governors in these regions. According to some it is believed that due to this war may have been the cause of death of two Alexander’s governors namely Nacanor and Phillip.

He then waged war with Seleucus I Nicator. Seleucus I Nicator was the governor general of Macedian kingdom and founder the Seleucid Kingdom. Both Chandragupta Maurya and Seleucus continued war until they came to an understanding.

With the help of Seleucus, Chandragupta Maurya expanded his region in South Asia. Selcucus also had given places like Kandahar, Balochistan and Gandhara as a marriage treaty. For this Seleucus had got 500 elephants in return.

However, the detail of the treaty is not mentioned anywhere. Chandragupta sent 500 elephants to Seleucus which was very important and helped Selcucus to win the battle of Ipsus. Later Seleucus sent Megasthenes as an ambassador to Chandragupta Maurya court then for his son Bindusara, Antiochos and Deimakos as ambassadors.

Chandragupta Maurya after acquiring provinces west of Indus River, he now eyed to conquer the Southern part of India. He wanted to expand his empire beyond Vindhya Ranges and in the Deccan Plateau. Chandragupta Maurya was able to establish a vast territory across India.

Chandragupta Maurya was not only an able conqueror but also a good administrator.  He developed an elaborate system of administration. He was the supreme head, and he was assisted by the council of ministers along with Chanakya. He divided his empire into four provinces known as Jana pada.  He was fortunate to have Chanakya in his team.

Another province took care of city affairs and development of the city. It looked after the infrastructure of the city, tourists, temples, industries, harbors and also matters relating to the trade. They also collected taxes and managed standardized weights.

The third took care of the military, arms and the requirements of the soldiers.

The revenue officer was called as Samahartha. Taxes were collected both cash and kind. The major source of income was the land revenue. Revenue was collected from trade custom, excise, toll, forest and trade. The house tax and water tax were another source of income.

The Mauryan Empire was famous for good infrastructure development. They developed a strong economy for the improvement of roads, irrigation and mines. Mauryan are credited for building roads and connecting far off places by road.

The best example for the good construction of roads during Chandragupta Maurya time is the thousand-mile-long highway connecting Pataliputra in Bihar to Takshashila  which is in Pakistan now.

Some of the other major road developments include connecting Pataliputra to Nepal, Kapilavastu, Dehradun, Mirzapur, Odisha, Andhra and Karnataka. With good road conditions helped the economy of the empire as it boosted trade and commerce. Transportation from one place to another place was easy.

He also developed a good irrigation system and reservoirs.

There is not much evidence to show the style of art and architecture during Chandragupta Maurya period. Archeological discoveries like the Didarganj Yakshi which was discovered in 1971 suggests that the art could have an influence from the Greek style.

The Mauryan Empire had a very well-planned army system. According to Megasthenes It had around 600,000 infantry, 30,000 cavalry, 8,000 chariots and 9,000 war elephants. Along with the help of Chanakya, Chandragupta Maurya had developed a very planned and good military system. Both the king and the prince had extensive training in warfare.

The army was very well organised by a council of 30 members which was further divided into six boards namely 1) the Navy, 2) military transport, 3) Infantry, 4) cavalry, 5) Chariot divisions and Elephants.

The Navy usually served at the coast guard and guarded the waterways trade. Some of the weapons used by the soldiers during Chandragupta Maurya period were bows, spears, shiels which were either round, rectangular, or bell shaped, pikes, lances, maces and many other varieties.

The Empire also had a spy system which was very efficient and useful during the Chandragupta Maurya period. These spies were very loyal to the king and informed the king with all kinds of developments in the kingdom and outside as well.

There is no clear evidence with regard to the date of death of Chandragupta Maurya. He made Bindusara as his successor and also asked Chanakya to continue as the chief advisor for the Mauryan Empire.

According to the Jain texts it is believed that Chandragupta Maurya renounced all the worldly pleasures and followed Bhadrabahu along with other Jain monks to Karnataka. He practised Jainism and traveled far in south India before he settled in Shravanabelagola and led an ascetic life.

Chandragupta Maurya was a great ruler who founded the Mauryan Empire and ruled for nearly 24 years. He was later succeeded by his son Bindusara. He along with Chanakya had a good administrative system and conquered most parts of the Indian subcontinent.

Chandragupta Maurya left a legacy which is still in the history books. All the religions like Buddhism, Jainism, Hinduism and Ajivikas were given the same respect. Even to this date Chandragupta Maurya is considered as the most powerful and influential emperor of ancient India.