The Brahmin and the goat story

The Brahmin and the goat story

Once upon a time there lived a pious brahmin  by the name Mitra Sharma in a small village. Everyday he used to get up early in the morning and do all his religious rituals.

He was invited by various people in the village to perform the religious ceremonies at their place. One day the brahmin was invited to a house which belonged to a rich man. He performed various religious rituals at his home. The  rich man was very happy with the brahmin and gifted him with a goat. The brahmin happily accepted the goat and placed it on his shoulders. 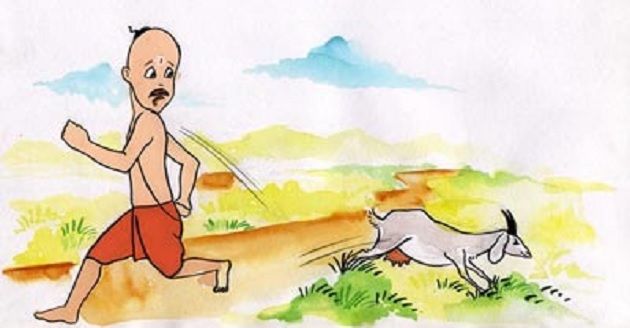 As the brahmin reached a lonely place the first conmen came near the brahmin and said “ Hello sir with respect to you, I am shocked to see such a religious man carrying a dog on his shoulders.” The brahmin was surprised to hear such words. He said “ Are you blind? It is not a dog but a goat.”  So the cheat replied that “ Respected sir, I told you what i saw. I am sorry if i have hurt you. But you are carrying a dog and not a goat.”  Saying so the first cheat went away.

The Brahmin's gift- The Brahmin and the goat story

The brahmin had just barely walked a few steps then another cheat came out from his hiding place. He said to brahmin. “ Hello sir, I really feel pity for you. Why are you carrying a dead calf on your shoulders? You seem to be a very religious person.”

Thinking about the past two incidents, the brahmin started to move towards his home. As he walked further a few steps the third cheat came out from his hiding place and said laughing loudly. “ Dear sir, why are you carrying a donkey on your shoulders ?  Hearing the third cheat the brahmin was really worried and did not tell anything. He just started to walk back thinking about the three incidents.

The brahmin thought  “ Is it a ghost or a goat?” The brahmin thought the goat gifted by the rich man was some kind of ghost rather than a goat as it transformed into different animals like the dog, dead calf and donkey. The brahmin was really scared and left the goat in the middle of the road and ran away towards his home.

The three cheats were very happy as their plan was successful. They took the goat and feasted on it.

The brahmin lost his goat. That's why we should never believe in what others say.

Moral: One should not believe blindly what others say: