Timings: opens at 6:45am in the morning and closes at 2:45pm in the afternoon. 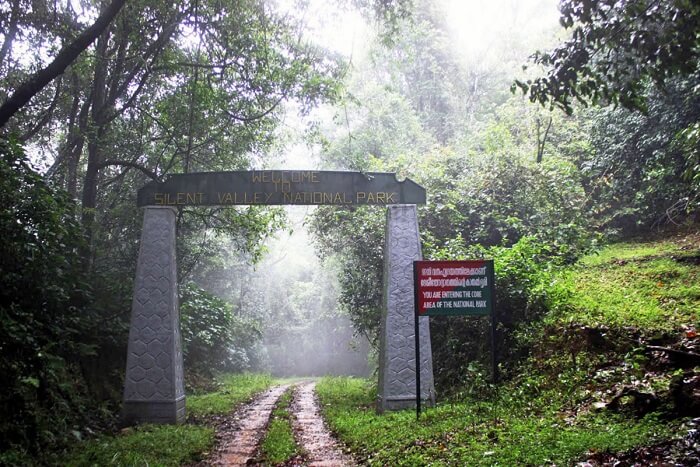 Initially the park was only 89km but in the year 2009 the then union minister included the buffer zone area to the park and increased the total park area to 237.2Km2. The buffer zone was included in the park mainly to stop poaching of wild animals and to stop all the illegal activities that was happening in the buffer zone.

The valley got its name as silent valley because of the absence of the cicadias insects in the region.  Once you enter the park through the main entrance you will forget the world and get yourself immersed in the nature’s beauty.

Silent Valley National Park is in the southwestern corner of Nilgiris.  The park is rectangular in shape with continuous ridges on east, northeast and north borders. These ridges separate the Sispara peak at the north end of the park.

Towards the south the park slopes down towards Palakkad Plains and again bounded by ridges in the west. the soil is blackish and little acidic in the evergreen forests.

The park is divided from North to South by Kuntipuzha River. Some of the main tributaries of the river like Kunthancholapuzha, Karigathodu, Madrimaranthodu, Valiaparathodu and Kummaathanthodu originate from the upper slopes of the eastern side of the valley. most of the major tributaries originate from the upper slopes on the eastern side of the valley. The Bhavani River is the tributary of Cavery and is one of the largest rivers. It originates in Nilgiris draining the southern slopes of Nilgiris. The river Kunti is crystal clear and doesn’t get dirty. However, the streams of the western slopes are dry in summer

The park is open all around the year. The summer months are April and May. The park would be dry, and spotting of animals is high during summers as lot of animals come near the water source to quench their thirst. The park receives heavy rainfall during monsoon season.

Even though the valley receives good amount of rainfall still the amount differs from region to region due to the topography of the valley. December is the coolest months in the year and April and May are hot.

Silent valley has some breath-taking flora and fauna.  The park is mainly dominated by evergreen forests. The dominant trees that can be seen here are teak, bamboo, rosewood, semla, different varieties of orchids, cardamom, black pepper and many important Ayurvedic medicinal plants.

There are around 1000 species of flowering plants and 110 species of orchids and many species of lichens, algae and liverworts. The valley is filled with 700 species of Dicotyledons and 265 monocotyledon plants. The flora and fauna make one wonder if these species have survived from many years. Some of the plants that are in the silent valley are Oryza Pittambi, Impatiens sivarajanji, Balsaminaceae , grasses legumes and many endemic plants.

The fauna has also no words to describe. The park has a wide range of species like tiger, elephants, Lion Tailed Macaques and Malabar Giant Squirrels, Nilgiri Langur and Hairy winged bat. The other species in the valley include 15 species of invertebrates,19 species of amphibians, 128 species of butterflies, 400 species of moths and around 500 species of earthworms and leeches.

The park has around 730 species of insects, 128 species of beautiful butterflies and around 400 species of moths. There are many crickets, grasshoppers, beetles and Coleoptera.

By road: Nearest Bus station is Palakkad. The silent valley is well connected with roads and many cabs are available from different places.