Light and Sound show : Every day from October to February at 6:30 pm

Amer or Amber fort is located on a top of a hill near Jaipur, Rajasthan, India. It is located in Amer town which is 11 kilometers from Jaipur

By road: The Rajasthan  State Road Corporation has excellent connectivity within Rajasthan and also with different states in India. There are also private buses and cabs. The public buses that run from Ajmera Gate and MI road take around 20 minutes to reach the fort.

Best time to visit Amer fort is from October to March.

The summer months from March to June are very hot. The maximum temperature hovers around 48 degree celsius.

The monsoon months from July to September are very humid and the maximum temperature may hover around 40 degree celsius.

During October to February  the weather remains good and chilly. During peak winter season in December and January the minimum temperature may hover around  5 degree celsius. 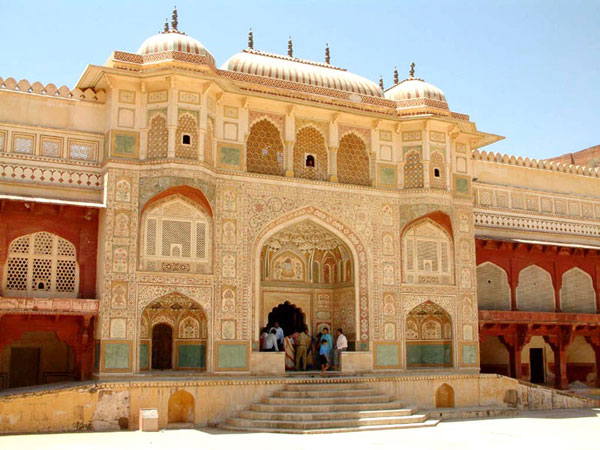 Amer fort or Amber fort is located in Amer, Rajasthan ,India. Standing tall on a hill, this huge magnificent fort is just 11 kilometres from Jaipur City. It is one of the most important tourist destinations in Rajasthan.

Thousands of tourists from all over the world  visit  this place to witness and experience one of the historical majestic forts in India. Adding to the charm of the fort is the Maoto Lake which is within the fort complex.

The fort was built by Raja ManSingh later certain additions to the fort were done by Sawai Jai Singh. Amer fort is famous for the elephant ride and the light and sound show. In 2013, the fort was declared as a UNESCO World Heritage Site as a part of the group of Hill forts of Rajasthan.

Built in Red sandstone and marble the fort has Diwan-e- Aam, Diwan-i-khas, Sheesh Mahal and Sukh Niwas. Within the  vicinity  of each other there are four courtyards. Amer fort along with Jaigarh fort is located above on the Cheel ka Teela ( Hill of the Eagles).

Both the Jaigarh fort and the Amer fort are considered as one complex due to the secret  passage which was used to escape during the war times by the royal family and also for others in the Amer fort to escape. 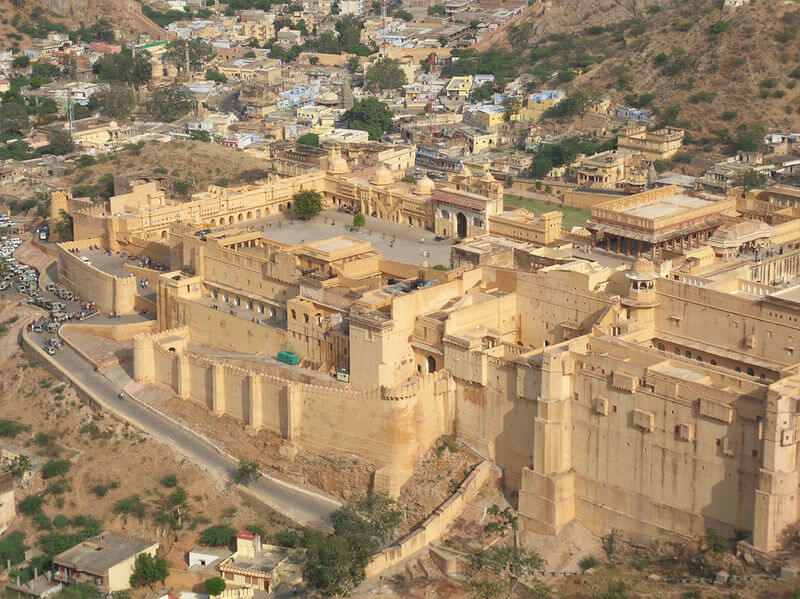 Read about History of Rajasthan

Amer or Amber fort derived its name from Ambikeshwar temple (Lord Shiva) which was built atop of the Cheel ka teela. However the local people suggest that the fort got its name from Amba who is the mother of Goddess.

Amber or Amer was earlier known as Dhundar in the medieval period. The city was ruled by Kachwahas between 1037 AD and 1727 AD.  Later the capital was moved from Amer to Jaipur. Amer fort was built by Raja Man SIngh and later Raja Jai Singh I expanded further. However the fort went on for various expansions and renovations from the successive rulers. 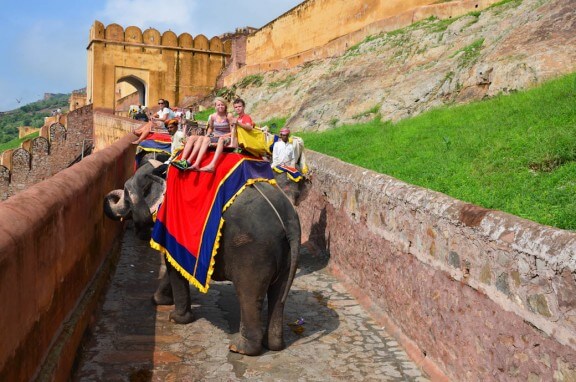 Architecture of the Amer Fort Jaipur

The Amer fort is built using red sandstone and marble. There are many ancient  paintings and also portraits of the Rajput leaders at many places over the fort. The fort is divided into four layouts. Each layout has a separate entrance gate and courtyard.

The main entrance to the fort is through Suraj Pol . The entrance gate got the name as it is facing east. This gate leads to the first courtyard. This was the place where the armies used to hold victory parades after the war. Women from the royal family would watch this spectacular parade through latticed windows.

Check out pages on Indian Dynasties

Jalebi Chowk was built during Sawai Jai Singh reign, is one of the four courtyards. From Jalebi Chowk an imposing stairway  leads to the main palace grounds. The steps to the right would lead to Sila Devi temple. The Rajput Maharajas have worshiped in this temple since the 16th century.  The entrance to the temple has a double door covered in silver with a raised relief.

The second courtyard houses the Diwan-i-aam or the Public Audience Hall. It is a big Hall open on three sides. The king used to receive complaints from the public in Diwan-i-aam. The Diwan-i-aam stands on two columns of pillars with mounted elephants.

The entrance to the third layout is through Ganesh Pol or Ganesh Gate. The third courtyard has two buildings, both are separated by  Garden which is done similar to Mughal Gardens style.

To the left of the garden is the Jai Mandir also known as Sheesh Mahal is the most imposing and attractive place in the fort. Construction of  Sheesh Mahal was started  by  King Man Singh in the 16th century and was completed by 1727. The walls and the ceilings of the building have beautiful carvings of flowers and paintings.

The sheesh mahal  has glass inlaid and multi mirrored ceilings. The mirrors used are of convex shape which are beautified with colored foil and paint.

Check out tourism pages on different Indian States like 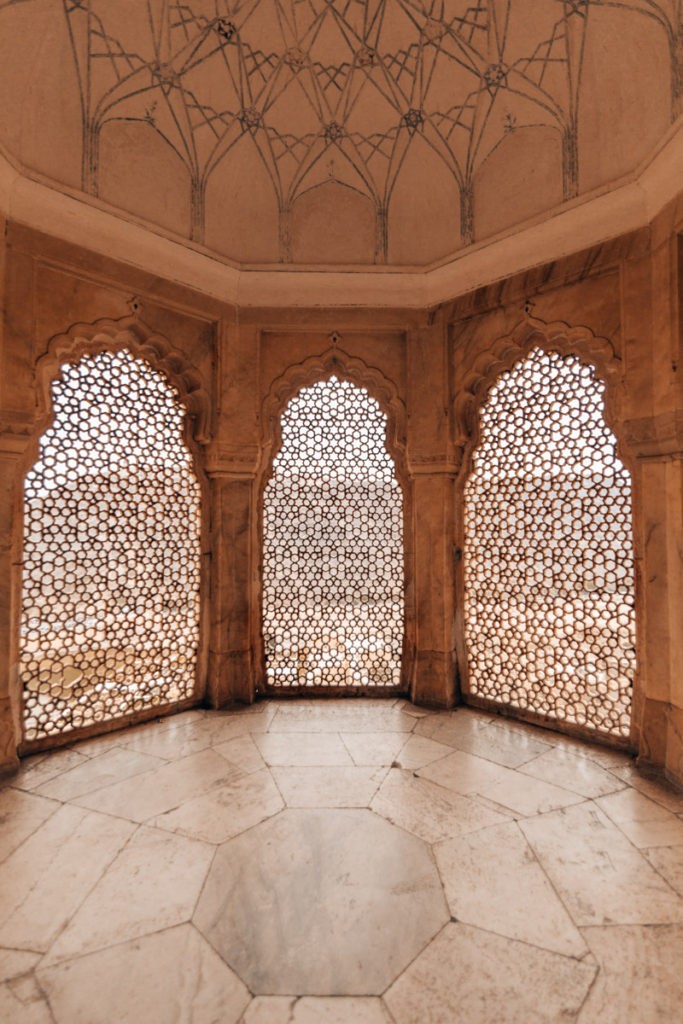 One of the major highlighting features of Amer fort is the Magic Flower which is carved out from a marble showing two  hovering butterflies. The flower has fishtail, elephant trunk, lotus, cob of corn, lion’s tail and cobra.

The fourth courtyard has many rooms where the queens used to stay. To the south of this courtyard lies the oldest part of the fort which is the palace of Man Singh I.

It almost took 25 years to build this massive palace. At the centre is the pillard  bardari ( pavilion with 12 doors for free flow of air) and rooms on the ground and upper floor.

The pavilion had rooms all around with open balconies for fresh air to move in. The exit from the palace would lead to Amer town.

Places to visit near Amer fort:

Jaipur being a place of palaces of forts has many tourists places. Some of the important places to visit near Amber or Amer fort are