This is another classical and intelligent story from the collection of Akbar and Birbal stories. Akbar was the famous Mughal king who ruled India for many years and Birbal was his favorite minister. Birbal was one of the nine gems of Akbar.

One day it so happened that Akbar was very angry and upset over Birbal. He asked Birbal to leave the kingdom. Birbal was sad but accepted the command of Akbar. He went too far off villages and started living in a different identity. 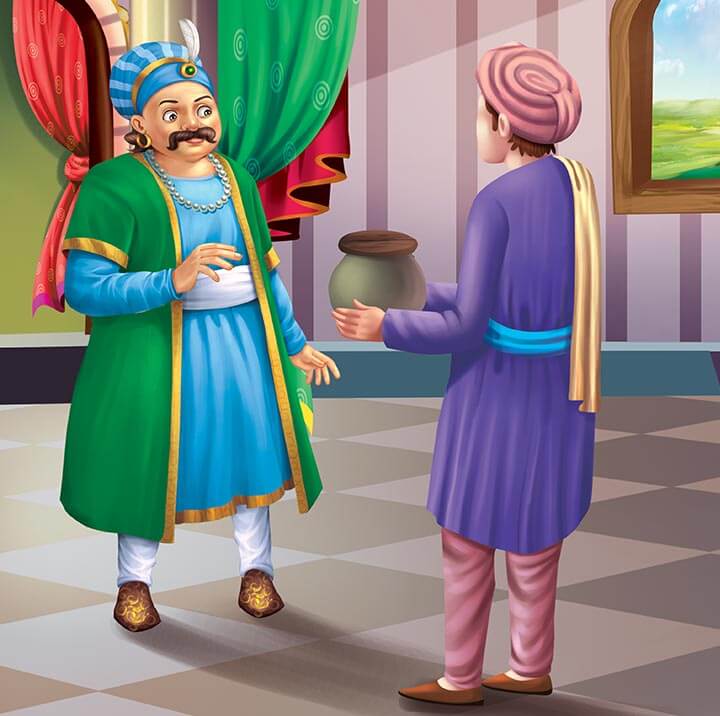 Couple of weeks passed and Birbal did not return to the kingdom. Akbar started feeling lonely and was missing Birbal very much. Akbar regretted his mistake and sent his soldiers to find Birbal and bring him back to the court.

All the people in his kingdom were very astonished and did not understand how to put a wit in the pot. Birbal also heard the news. Everyone in the village where Birbal was staying was worried. As diamonds and gold are very expensive and they did not know how to fill a wit as it was not a thing.

Birbal who heard the conversation of the villagers said, “Don't worry give me the pot and I will fill the pot with wit.”

The villagers trusted him and gave the pot to Birbal. The villagers were not aware of his identity. Birbal took the pot and went back to his place. He put a small piece of watermelon in the pot without separating it from its plant. He watered it regularly. After a few days the watermelon had grown so big that it was impossible to remove the watermelon from the pot.

Later Birbal sent the pot to the king.  The king understood that this work was from none other than his minister Birbal. Akbar was very happy and asked his soldiers to bring him back,

Moral: It is important to think hard to solve strange questions.