Coonoor is a popular hill station located in the Nilgiris District of Tamil Nadu, India.  It is at an elevation of 1,850 m above sea level and just around 20 kms from Ooty.  It is probably  the second most popular hill station in Nilgiris. The place is famous for tea gardens and tea factories. The British made Coonoor as the summer retreat in the 19th century as it is very closely located to Ooty.

Coonoor  gives a beautiful panoramic view of the lush green Nilgiris hills, waterfalls, valleys along with chirping of different birds from the hills. Coonoor and the Nilgiri Hills have been the home for Toda tribes for centuries. The place began to develop only by the 19th century when the British made it as a summer retreat along with Ooty. 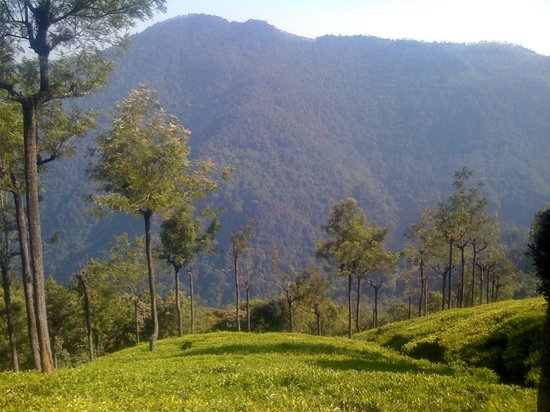 Summer seasons: March to May are the summer months. The maximum temperature hovers around 30 degree Celsius. The weather remains pleasant even in the summer season.

Winter season: November to February are the winter season. The minimum temperature hovers around 10 degree Celsius. One can feel the chill in the air.

Due to the good climatic conditions, Coonoor is a year-round place. However, March to May and November to February are considered the best times to visit the place.

By air: Coonoor does not have an airport of its own. The nearest airport is the Coimbatore International Airport which is at a distance of around 70 kms. Coimbatore airport is well connected from major cities within India and outside India. From here one can take a cab and drive down to Coonoor. 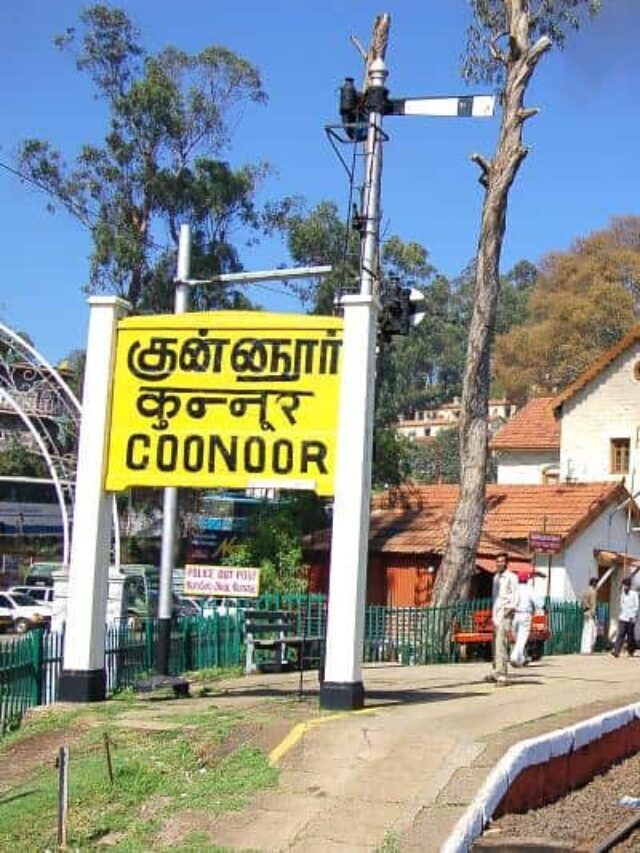 By Rail: Again Coimbatore railway station is the nearest station to Coonoor. From here one can take a cab or taxi. Apart from this Nilgiris mountain railways connect Coonoor to Ooty and Mettupalayam.

By Road: Coonoor has well connected road service. Ooty and Coonoor are connected through National Highway 67 which also connects Coonoor to other cities. Buses services are available from most of the major cities in South India.

Places of Interest/ Tourism in Coonoor

Coonoor has many tourist attractions. Coonoor gives a panoramic view of the lush green Nilgiri Hills, valleys, ravines and waterfalls. The most important activity here is the Bird watching as the place is filled with different species of birds like cormorants, pipits, thrushes, skylarks, Nilgiri verditer and many more. Some of the important tourist place are 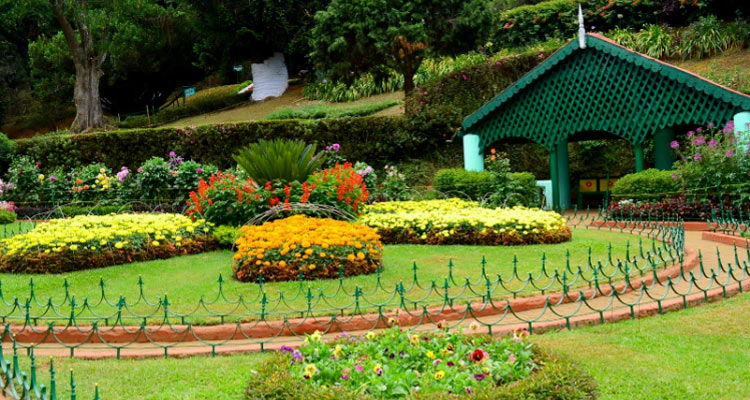 Located at a height of 1780 m above sea level, Sim’s Park is an important tourist place in Coonoor. It is a botanical garden spread over an area of 12 hectares which was developed along the natural boundaries by J.D Sims and Major Murray in 1874. It is a natural garden with a beautiful terrace, lawns, rock garden and colorful flower beds. There are also naturally present trees, shrubs, creepers and many different unusual species of plants.

Some of the rare trees that can be seen here are Rudraksha bead tree,  Cinnamon, Ornamental tree, Turpentine, Magnolia, Camellia, Quercus, Phoenix and many more. There is  a glass house in the garden which is very well maintained.

The park has around 1000 species of plants and 85 different families of plants. Due to the perfect tropical climatic conditions, the garden boasts different colorful flowers and trees.

The main attraction of the park is the natural shola with winding footpaths all over the higher slopes of the park. The park is very well maintained and is truly a must visit place in Coonoor. 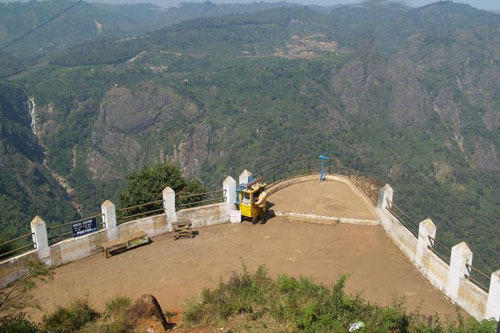 Dolphin's nose is one of the perfect places to visit near Coonoor. It is  located at a distance of 10 km from Coonoor at a height of  1550 m above sea level. It is a gigantic rock protruding outside which resembles a Dolphin's nose. It is surrounded by canyons on both sides. One can see the beautiful Catherine falls which is several thousands meters below and located a short distance from Dolphins nose.

The fort is in complete ruins now with only one wall remaining in the entire fort. The fort is around 15 kms from Coonoor and was used as an outpost by Tipu Sultan in the 18th century. There are quite a few different varieties of birds which hover around the fort.

It is a beautiful waterfall in Kotagiri near Coonoor. It is a double cascaded waterfall wherein the upper fall drops to the floor and is the second highest in Nilgiri Mountains. Falling from a height of 250 ft the gushing sound and falling  of the waterfall is a treat to the eyes.

It is believed that the waterfall is named after the wife of M.D Cockburn who is believed to have introduced the coffee plantations to Kotagiri. The original name of the Catherine falls is Geddhehadda Halla which means “ Foothills Dale River.”

Lamb's Rock is a tourist place located at a distance of 8 kms from Coonoor. The place is famous for tea estates and tea gardens. It is on the way to Dolphin's nose view point.

Just  5 kms from Coonoor, Law’s waterfall is one of the best falls near Coonoor. The water gushing from a height making noise on the rocks is just beautiful to watch. It is located on the way towards Mettupalayam. 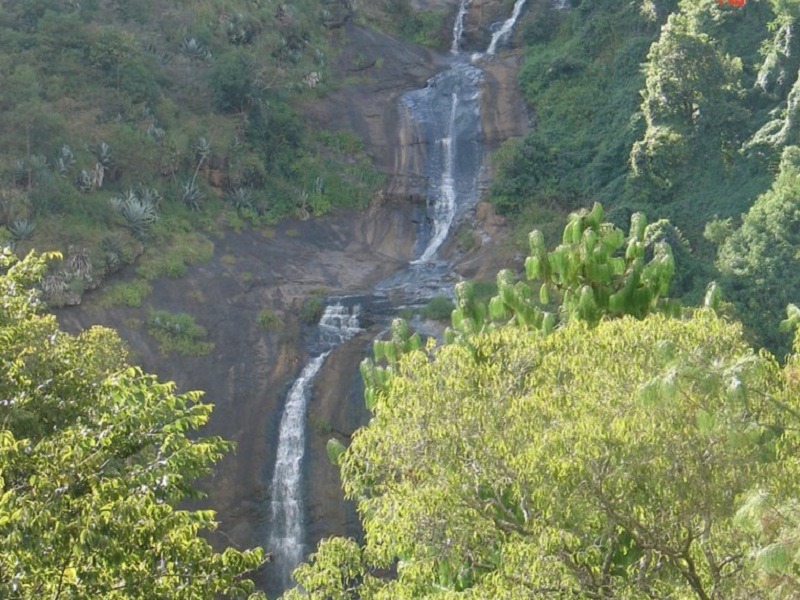 It is located at a distance of around 10 kms from Coonoor in Nilgiris district. It falls from a height of 180 ft between the rocks. It is the third largest fall in the Nilgiris and can be reached by trekking. The fall was the site for the first hydro electric plant in India.

Located at just 9 kms from Coonoor, it is a very important place to visit. The place is named after Countess Charlotte Canning. She was a British artist and was the first vicereine of India. One can get a panoramic view of the mountains, tea gardens and greenery all around.

Located in the Ooty- Coonoor road it is also called the Switzerland of South India. It is the second largest valley which is surrounded by lush green and blue mountains. It can be explored and experienced by taking a 25 minute toy train ride. The Todas and the Badagas tribe belong to the valley and cultivate fruits and vegetables.

The most unexplored part in Coonoor is the Hidden Valley. It is accessible only by trekking. The valley is located behind the Wellington Golf Course near Sim’s Park. Surrounding the entire Coonoor, Hidden Valley has many streams and hiking trails. The place is also famous for diverse species of birds.

It is located just 9 kms from Coonoor on the Wellington Road. Rallia Dam provides water to the whole of Coonoor. It is a quiet and peaceful place to spend some quality time with nature. One can spot some Bison or Malabar squirrels near the dam. The best time to visit the dam is either during sunrise or sunset.

Drenched with the aroma of tea, High field tea factory is truly a must visit place in Coonoor. It is located at a distance of around 2 kms from northeast of Upper Coonoor.

The palace is famous for the 50 years old tea factory where the tourists can see how the tea is being processed. The estate is surrounded by eucalyptus oil trees. One can also learn the extraction of oil from the eucalyptus.

Coonoor is one of the best places to relax and enjoy nature's beauty.