Ooty also known as Udhagamandalam is located in the Nilgiris District of Tamil Nadu, India. Popularly known as Queen of Hill stations and Western Ghats, it is one of the most important tourist places in Tamil Nadu. It was the summer capital for Madras Presidency during British rule in India.

How to reach Ooty

Ooty is one of the most popular hill stations in South India. It is easily accessible through air, land and rail.

By Road: Ooty is well connected through road. Some of the distances from the major cities are : Coimbatore ( 86 km), Bangalore (270 km), Mysore( 124 Km). Both government and private buses are available from these major cities. 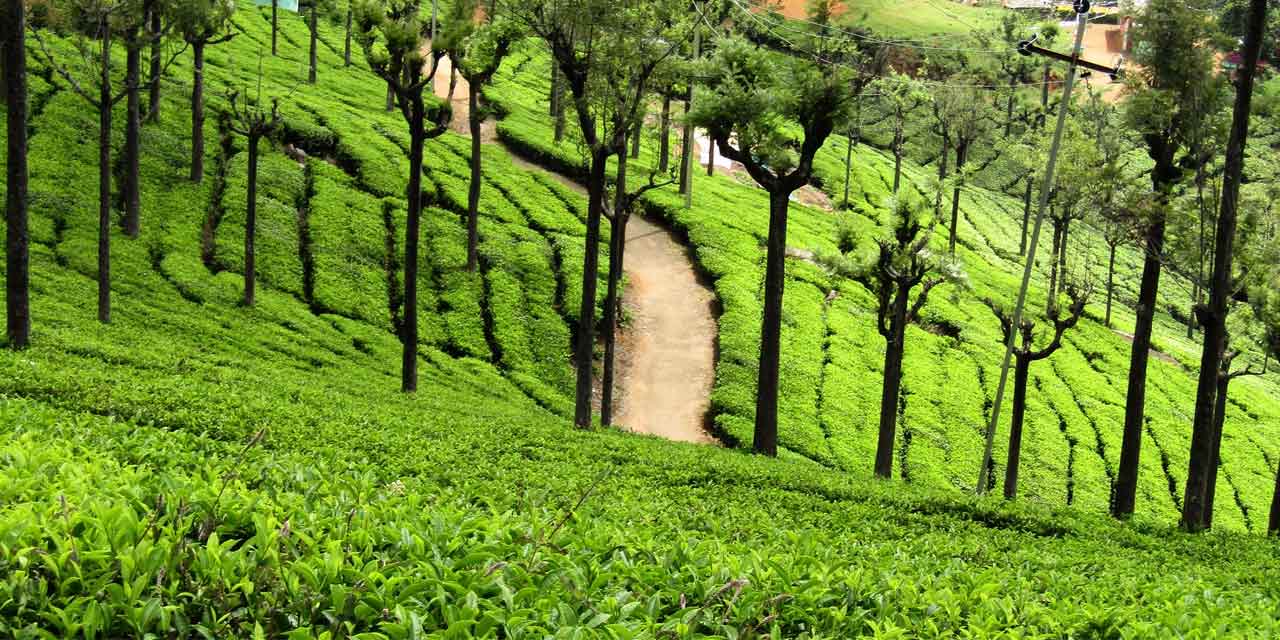 Ooty is located in the Nilgiris Biosphere Reserve.  Ooty has a subtropical climate. Being a hill station, Ooty enjoys a cool and pleasant climate. Temperature remains mostly constant throughout the year. It is situated at an altitude of 2,240m.

Summer Season: March to June are the summer months. The maximum temperature hovers around 28 degree Celsius. Summers are pleasant and one can enjoy the climatic conditions even in the summer season.

Monsoon season:  Monsoon is from June to September.  Rainy season is generally windy and cool with the place receiving modest rains. With lush green and rain drops on it truly is mesmerizing.

Winter Season: October to February is the winter season The minimum temperature drops to around 5 degree Celsius.

Due to the climatic conditions, Ooty is a year round visit place. However, summer months from March to June are considered as the best time to visit the place.

Earlier Udhagamandalam or Ooty was under complete control of tribals called Toda, Kurumba, Irula and Kota. Todas were famous for farming activities and raising water buffalo. Nilgiris was ruled by many dynasties like the Vijayanagara Empire, Hoysala dynasty, Rashtrakutas, Satvahans and Kadambas. Tipu Sultan had captured the Nilgiris in the 18th century but the Nilgiris fell into the hands of the British East India Company and a  treaty of Srirangapatna was signed between the British and Tipu Sultan.

In 1818 the then collector of Coimbatore John Sullivan visited Ooty and acquired a plot from the Toda tribes and constructed a house entirely from a single stone. Sullivan and other officials from the nearby district built a summer residence at Ootacamund. Sullivan was the first person to introduce horticulture in Nilgiris. He constructed Ooty lake between 1823 and 1825.

Aranmore Palace served as a summer capital for the British during those days. Many British officials used to visit Ooty as a popular summer resort. After India got its independence, Ooty developed into a popular hill station.

Ooty Botanical Gardens was established in 1847. Spread over an area of 55 acres, the garden is very well maintained by the Horticultural department of Tamil Nadu. This beautiful garden is divided into several sections and lies on the lower slopes of the magnificent  Doddabetta Peak.

It is the highest mountain in the Nilgiris Mountains. The garden is the home for around 650 species of plants and trees which includes the fossil of a tree which is believed to be more than 20 million year old.

The garden has some exotic, indigenous plants, shrubs, ferns, bonsai and medicinal plants. At the centre of the garden is the 20 million year old fossil tree trunk. Being a garden the place has ponds with lilies, flowering lawns and different varieties of colorful plants.

The world famous Ooty Summer Festival is held in the month of May every year. It is a two day festival where around 250 exhibitors participate in the different flower shows. The first flower show was organised in 1896 and later in 1980 the government took control of the festival as the festival attracts thousands of tourists worldwide. 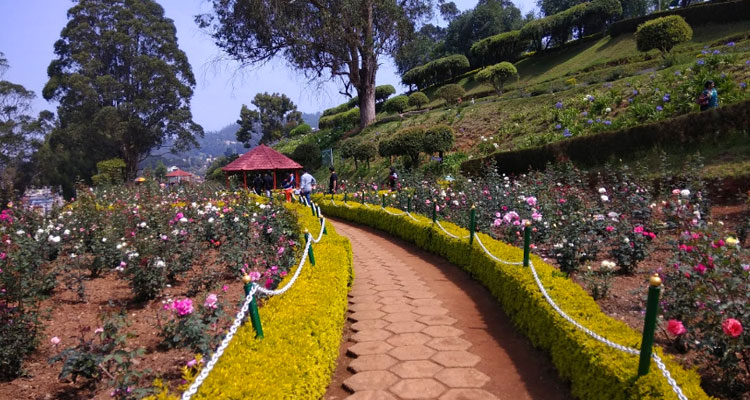 Government Rose garden is situated on the slopes of  Elk Hill in Vijayanagaram of Ooty town. The garden is open on all days from 9 am to 6 pm. It was established in 1995 to commemorate the cemetery flower show in Ooty Botanical Gardens.

The garden is well maintained by the Horticultural department of Tamil Nadu. Spread over 4 hectares, this rose garden is one of the most important tourist places in Ooty.

Due to the ideal tropical climatic conditions the rose garden has a long flowering season.  The garden proudly owns around 20,000 varieties of roses and 2,800 cultivars. Some of the roses are Miniature Roses, Ramblers, Hybrid Tea roses, Polyanthas, Floribunda and many more.

Doddabetta is the highest mountain in the Nilgiris mountains. Located at an elevation of 2,637 metres, Doddabetta is just 9 kilometres away from Ooty. It is surrounded by dense Sholas. There is an observatory at the top of the hill with two telescopes. 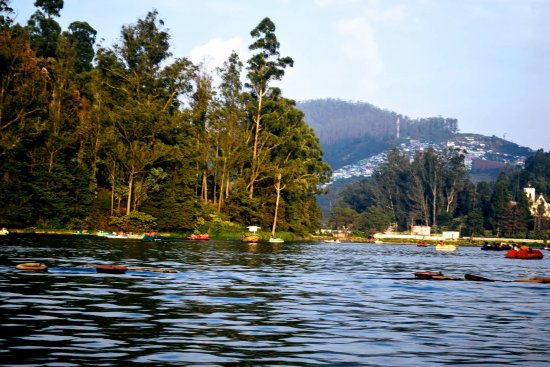 It is an artificial lake constructed by John Sullivan in 1824. The lake is beautifully surrounded by Eucalyptus trees.  The lake covers an area of 65 acres. The Tamil Nadu Tourism Corporation took control over the lake in 1973 and developed it into an important  tourist place. The length and the width of the lake is 2.5 km and 140 m. The lake is at a surface elevation of 2,220 m.

Boating is the main attraction in the Lake. There is a boat house which provides Paddle boats, Row boats and Motor boats. There is also a mini train ride along the lake.

Pykara River is a very sacred river for the Todas community. It is located around 19 kms from Ooty. The river rises in Murkruti and flows through Murkruti, Pykara and Glenmorgan dams. The river has a dam and one of the oldest power stations in South India.

The backwater of the river forms the pykara lake. There is a boathouse on the reservoir along with a restaurant. It is well maintained by the Tamil Nadu Tourism and Development Corporation. Boating is an important activity on the lake. 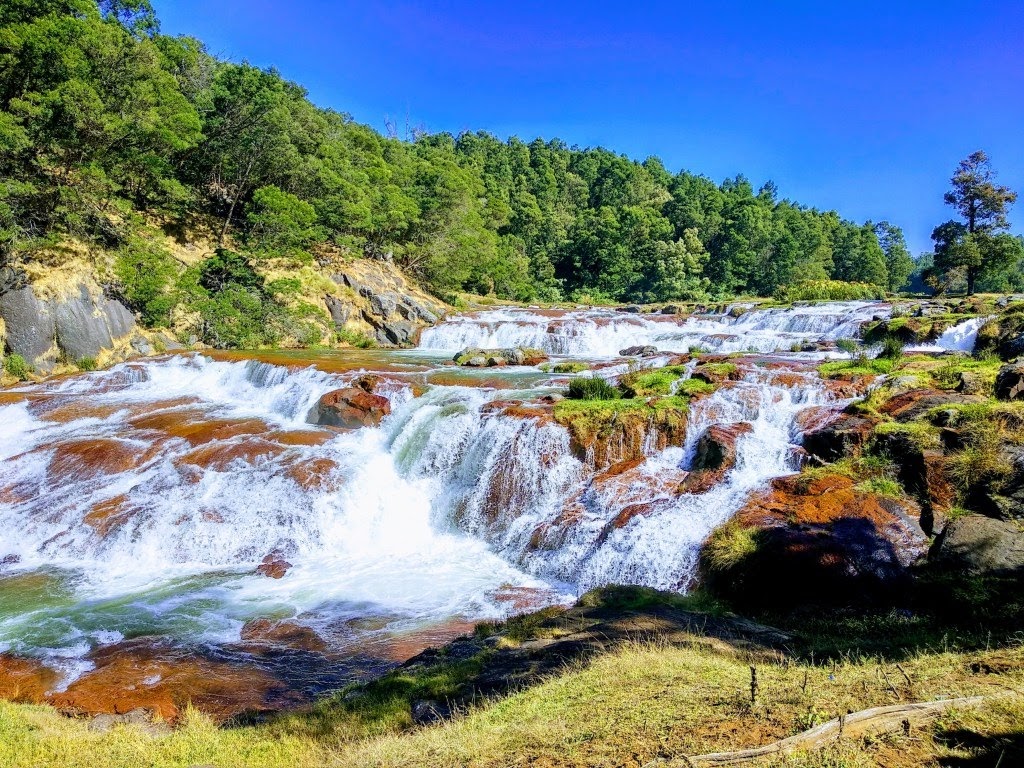 Pykara enjoys a subtropical highland climate. Due to its location in Nilgiris most of the months are wet months. January to March are considered dry months. Otherwise April to December are wet months.

It is located at 28 kms from Ooty in the Nilgiris district of Tamil Nadu. The region got its name due to the huge avalanche that took place in the early 1800s. Due to its beautiful natural surroundings it is one of the most important tourist destinations in Ooty. The lake is surrounded by beautiful landscape with colorful flowers like magnolias, orchids and many more.

Tourists can indulge in trout fishing, Rafting and Trekking. One can also visit the Avalanche Biosphere Reserve before visiting the lake. It is around 20 kms from Ooty. Tourists have to take the government vehicle for the safari into the thick dense forest.

Some of the wild animals that are seen here are Deer, Sambar deer, Bison, Foxes, Elephants. Last stop in the safari is Avalanche Lake. The place receives heavy rainfall. So better to carry rain coats if you are visiting during monsoon season.

Emerald lake is located in the silent valley which is around 25 Km from Ooty. The lake is famous for different species of fish and birds in the region. Surrounded by tea plantations one can enjoy the beautiful sunrise and sunset near the lake. 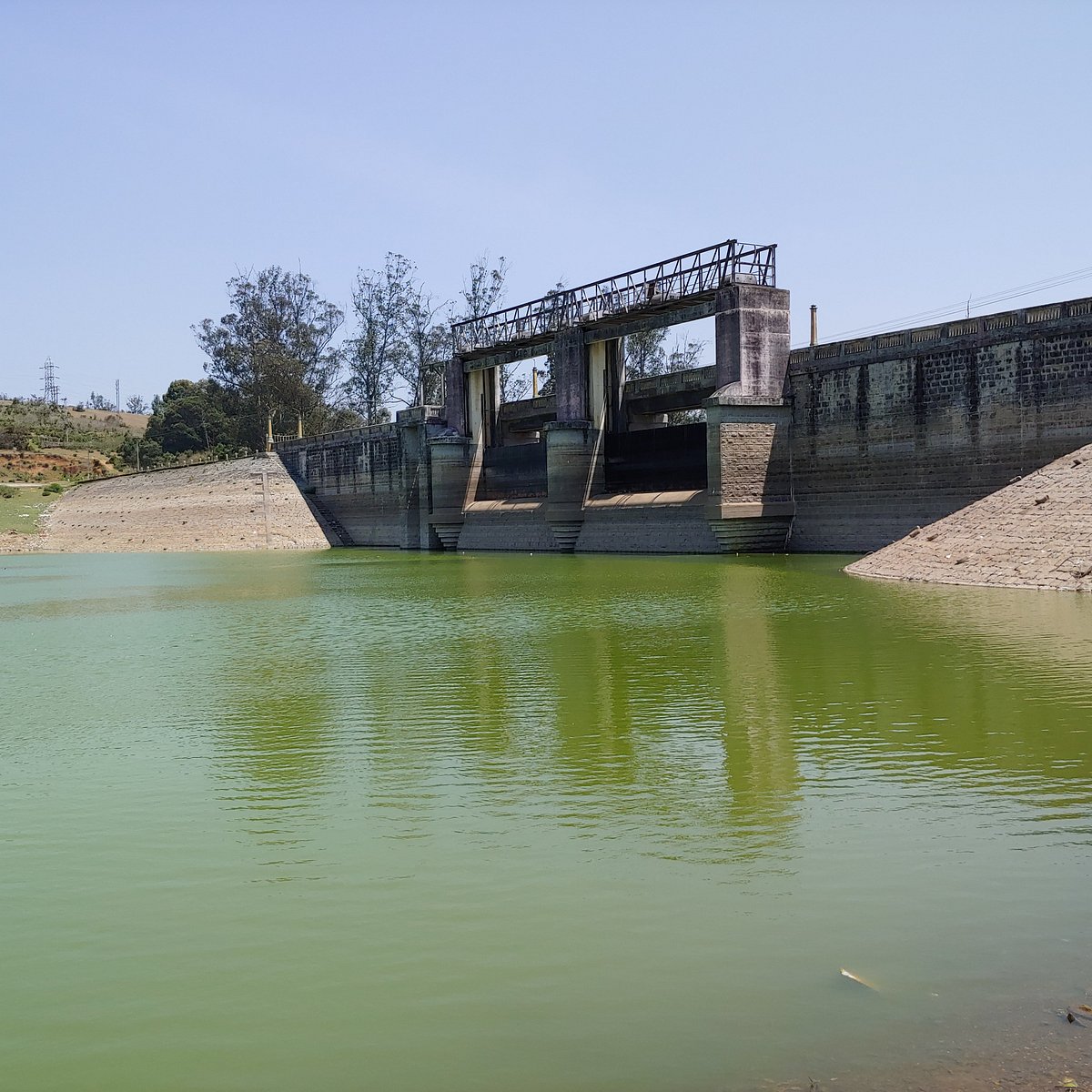 Also known as Sandynalla Reservoir, this place is blessed with pristine serene beauty and green slopes all around. It is located 10 Km from the Ooty bus stand.

It is a great picnic spot and to do bird watching along with indulging in fishing activities. The dam is surrounded by flora and fauna. Many different species of birds visit this place for fish and water.

Nilgiri mountain railway was built by the British in 1908. It is a meter gauge railway and is operated by Southern Railways. It is the only rack railway in India which still depends on its fleet of steam locomotives.

In 2005 UNESCO added it to the World Heritage Site of Darjeeling Himalayan Railways. It has the steepest track in Asia. Some of the important stations include: Mettupalayam, Bhavani River, Coonoor,  Wellington, Aravankadu, Ketti, Lovedale, Fern Hill and last is Udhagamandalam.

It is the first bungalow built in Ooty by John Sullivan. John Sullivan acquired the land from Todas and started constructing the stone house in 1822. Today it is the official residence of Government Arts College. The bungalow was called Kal Bangla by the tribals. 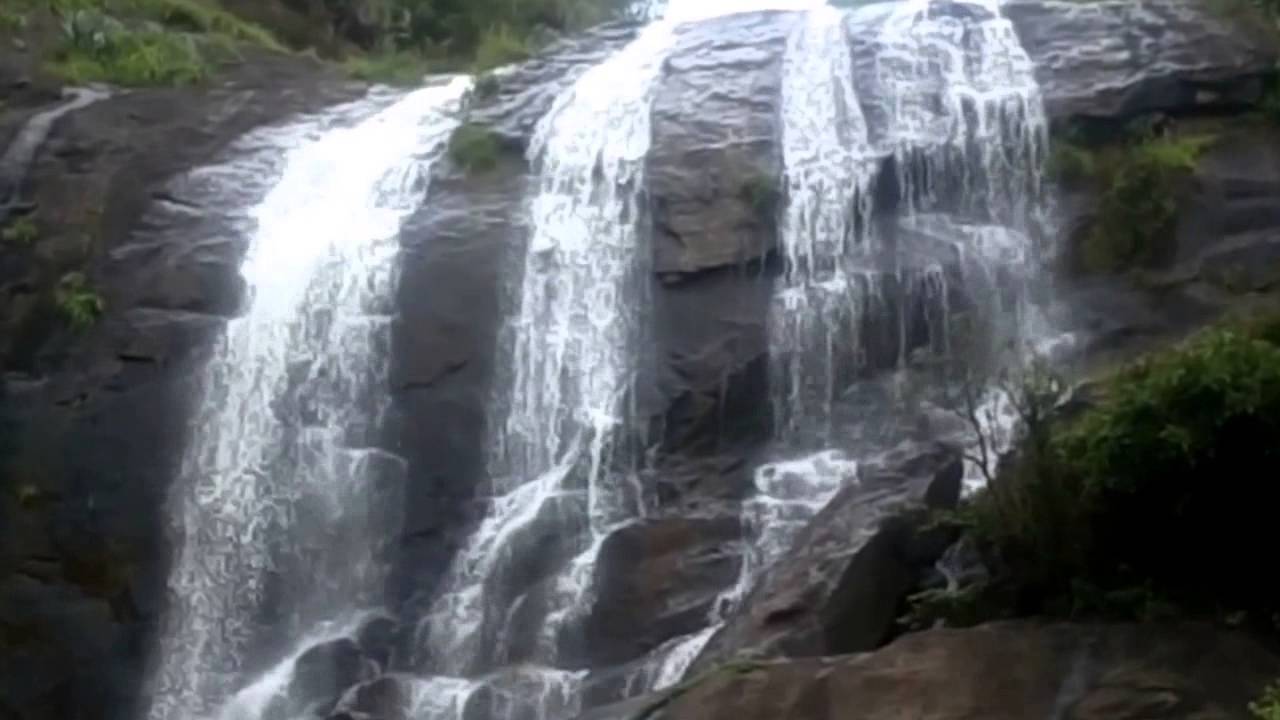 Kalhatti waterfalls is around 13 Kilometers from Ooty on the Ooty Mysore road. It is also called Bird Watcher’s Fall. One has to do a trek of around 2 miles from Kalhatti village to reach the waterfalls.

On the way to the waterfall one can see an age-old bridge and stone bridge which was built during the colonial period. The place is rich in fauna and one can see wild animals like Bison, Deer, wild dogs, wild Buffalo and different species of birds. The aroma of the spices like the cinnamon, clove and pepper increases the beauty of the waterfalls. 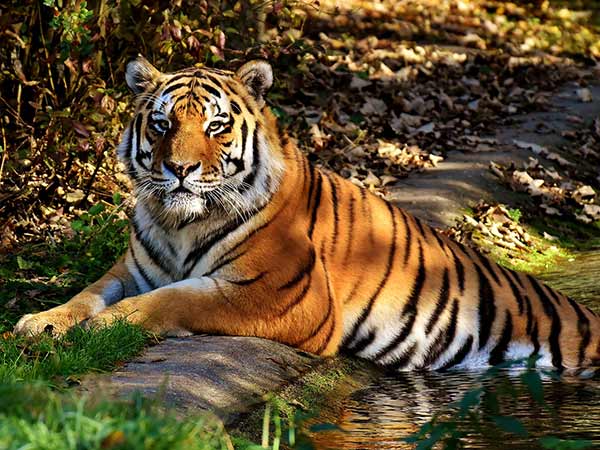 It is a National Park in the Nilgiris Mountains in Tamil Nadu. In 1986 the park was made a part of Nilgiris Biosphere Reserve and in 2007 it was declared a tiger reserve. It is at a distance of around 40 kilometres from Ooty. This beautiful National Park is filled with species of flora and fauna. For more details click on the link here.

Ooty is a beautiful hill station which is visited by thousands of people all over the world. It is truly a Queen of Hill Stations.