Famous for: Bengal tigers and other wild animals.

Ranthambore National Park is in the vicinity of Aravalli hills and Vindhya Plateau is one of the best places to view the wild animals. The park spreads approximately over an area of around 400 sq km while the Ranthambore forest spreads over an area of 1334 sq km.

The Ranthambore national park is not only famous for the tigers and other wild animals but also the place is famous for many other tourist places like the Ranthambore Fort, Jogi Mahal, ancient temples and many more.

The park is surrounded by Chambal river and Banas River on two sides. There are a number of small streams within the park which help the wild animals to drink water. The national Park is divided into 10 zones out of which zone 1 to 5 are best for tiger viewing.

How to Reach Ranthambore National Park

By Air:  The nearest airport is the Jaipur airport which is around 180 Km from the park. Jaipur is also close to Delhi. On reaching Jaipur one can take a cab and drive down to the park.

By Road: Ranthambore National park is well connected by road from all the major cities through state buses and private buses. 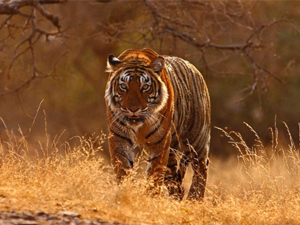 The  Ranthambore National Park has two shifts for safari to the visitors. Here are the detailed timings for the safari. The timings vary according to the season. When the day is shorter in winters the park closes early and opens early.

Basically there are two types of safari. One is jeep Safari and the other is the canter safari. In canter safari 20 people are made to sit in an open vehicle and Jeep is a six seater vehicle. The safari is for around 3 hours. There are  different zones at the Ranthambore National park. Zone 1 to 5 is the best for viewing tigers. In total there are 10 zones and each zone defines the territory of the tiger. 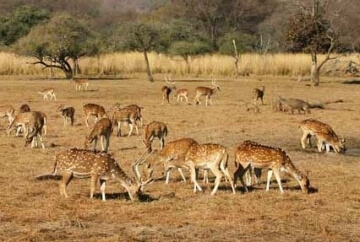 ZONE 1: It starts from Singh Dwar. One can spot tigers at Amreshwar Dang, Peela Pani , Gada Dub, Tuti ka Nalla and Sultanpur in this zone.

ZONE 2: This zone holds the maximum number of Chances for tiger sighting at places like Phuta Bandha, Lahpur Tiraha, Nal Ghati and others.

ZONE 3:  One can spot the tigers in Padam Talab.

ZONE 4:  Machli the female tigress can be spotted in this zone. The important locations to spot her include Lakkar Da, Adidaant, Lambi, Tamakhan and berda.

ZONE 5: Jokha, Dhakda, Singhdwar, Anatpur are some of the many locations visited most by the tigers and other fauna here.

Zone 6 (Kundal): This zone shares its boundaries with zone 1 and the chances of spotting T-39 (Noor) with her cute little cubs are more. The landscape of this zone is different from zone 1-5 and has more open grasslands with mountains in the background.

Zone 9 (Kuwal ji): This zone located at the bank of Chakal river an hene chances of viewing wild animals are more

Best Time to Visit the Park

October to December is considered as the best period to visit the park. All the gates remain open during this period of time. For wildlife photography, summer is the best time to visit the park as the tigers and other wild animals leave their caves in search of water.

Geography of the Park

Ranthambore National Park includes dry deciduous  Anogeissus Pendula forest. This kind of forest is found all along the northern and central regions of Aravali Mountain Ranges. Over a period of time many forests have been degraded. Situated between the Aravalli and Vindhya mountains ranges, the Park is blessed with some of the natural beauty in the dry region of Rajasthan.

Geography of the Ranthambore mostly includes the rugged and hilly  terrains. The hills to the north west are the Aravalli ranges. These ranges are mostly undulating landscapes and few valleys. These valleys are home for rich flora and fauna in the forest.   Some of the major water streams in the northern region drain to Banas river and in the southern region it is drained to river chambal. Some of these streams are only seasonal and during monsoon season they are filled with water.

The hills to the southwest of this forest are the Vindhya ranges. They have flat top hills. Both the rivers in Ranthambore National park have ravines which help to keep the greenery all along the park. These ravines are formed mainly due to the sandy soil all round the rivers. Some of the ravines around the Chambal river are as deep as 50 meters and extend upto 8 km in length.

As the mountains move from Vindhyas to Aravalli the geography of the park also changes. The park enjoys three climates-- summer, monsoon and winter. Summers are from April till June. During summer season the maximum temperature hovers around 43 degree celsius. The monsoon season starts from July till September.

Initially Ranthambore National Park was established as Sawai Madhopur Game Sanctuary in 1955 by the government of India.  In 1973 The park was included in the Project tiger reserves in India. By 1980 more than 12 villages were shifted outside the sanctuary and in order to protect the forest, the Sawai Madhopur Game Sanctuary was declared as Ranthambore National Park.

Due to severe exploitation of the forest area the Rajasthan forest act came into effect in 1953 in order to protect and safeguard the wild animals and forest. By 1973 a project tiger programme was started by the government to protect and nurture the tiger.

By 1980 12 more villages were sifted out of the sanctuary and an area of 282.02 sq km was declared as the national park. Again in 1984 130 sq km of the forest lying towards the south of Ranthambore National Park was included in the Tiger Project.

Due to  plenty of water available in the Park, Ranthambore National Park is rich in flora and fauna.  It is believed that the Park has around 500 species of plants with different varieties. Even though the park has plenty of water, the park is in proximity with the thar desert and gets scanty rainfall and hence vegetation in the park is dry deciduous type. 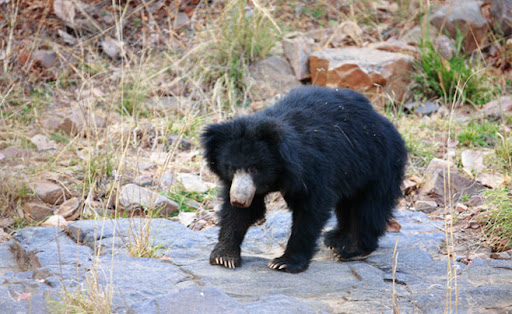 The most common tree in the Park is known as Dhok. It is the most dominant species grown in the park with vegetation cover of 80%. It is mainly found in the hilly slopes, valleys. The fruit and the leaves are the major food for wild animals like Deer,Antelope and Nilgai. The tree grows up to a height of 15 metres.

Apart from Dhok trees, some of the other major grown trees are Banyan, Peepal, Neem, Mango, Jamun, Chhila and many other flowering plants.

In fauna the park is famous for the Bengal tiger. Along with it the other wild animals that are present here are Deer, Leopard, Desert Cat, Sambar Deer, crocodile, mongoose, snakes and many more.

Ranthambore National Park is also home to a variety of bird species. There are around 300 different types of bird species. It is heaven on earth for bird watchers. Some of the common bird species include  Painted Spurfowl, Sarus Crane, Bronzed winged Jacana, Kingfisher, Sandpiper, Green hawks Owls and many more. Some of the birds from the north of Himalayas migrate to Ranthambore during winters.

Trinetra Ganesha temple: This oldest temple in Rajasthan  is situated inside the fort. It was built by King Hammer. King was a strong believer in Lord Ganesha and never forgot to offer his prayers to God. It is believed that he dreamt of Lord Ganesha before spotting the idol with three eyes in the fort.

Bakula: It is a densely forested region where chances of spotting the bengal tiger is more while doing Jeep Safari. It has small pools, water holes where tigresses along with their cubs may come during the summer season.

Kachida Valley: It is located on the outskirts of the reserve. This place consists of a large population of Panthers who have probably migrated to avoid any fight with the Bengal tigers. One can also see sloth bears in the valley. Kachida valley can be reached by Jeep safari.

Ranthambore Fort:  The fort is located inside the Ranthambore National Park is the UNESCO world heritage site. It is situated at a 700 foot high hill surrounded by a huge stone wall. The fort is filled with architectural marvels, tanks, pavilions and many other ruined structures.

Other than the above there are many other tourist attractions within the park and around Ranthambore National Park.