Now: The Fort is declared as UNESCO World Heritage Site

Chittor Fort is one of the largest forts located in Chittorgarh, Rajasthan, India. It is also known as Chittod Fort.  This fort overcame many sieges and battles which shows the bravery and resistance of the Rajput kingdom. It is a UNESCO World Heritage Site.

It is a huge fort spread over an area of 280 ha on a hill of 590 ft in height. This massive fort has seven gateways and is home for 65 important structures. These 65 historical structures include 19 temples, 20 water bodies and 4 victory towers. Chittorgarh fort along with five other forts were declared as Hill forts of Rajasthan in 2013 as UNESCO World Heritage Site. 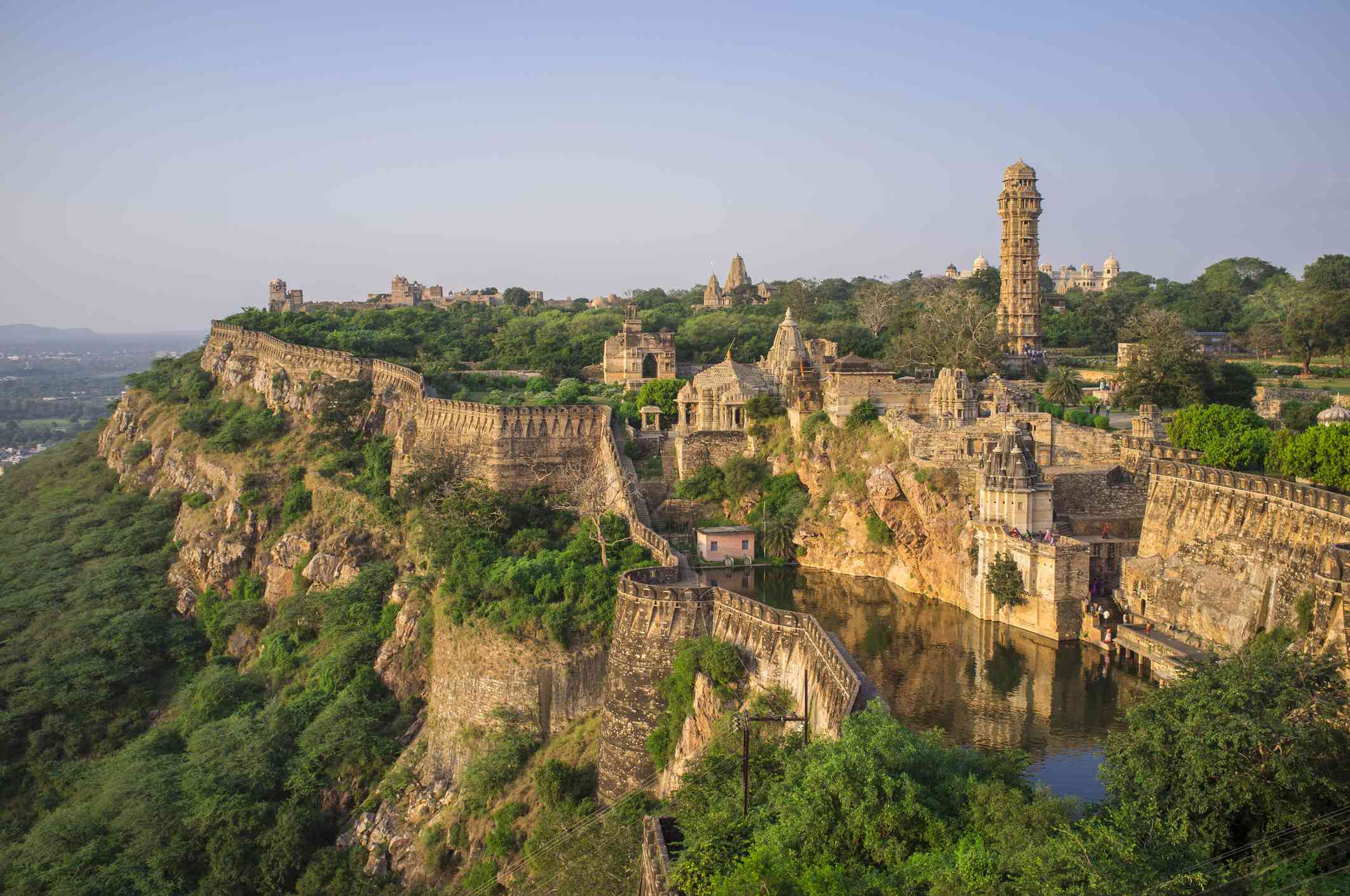 Many dynasties fought here to capture the massive fort. But many could not succeed. Bappa Rawal of Guhila dynasty was one of the earliest rulers who captured the fort either in728 CE or 734 CE. It is understood that Bappa captured the fort after defeating the Moris.

But according to some historians, Bappa took control of the fort by defeating the Arabs and not from Moris. Bappal Rawal along with RV Somani was part of the army of Nagabhata I of Gurjara Pratihara Dynasty who defeated the Arabs. Further it is also said that the fort was given to Bappa Rawal by Morris as a dowry during his wedding.

The earliest inscriptions which were discovered at Chittor are from the reign of Rajasimha.

The Guhila dynasty enjoyed the fort for a long period until 1303. The Delhi Sultanate ruler, Ala ud din Khiliji took control of the fort from Guhila king Ratnasimha after a siege which lasted for close to eight months. There was a lot of bloodshed and destruction, and it is believed that Ala ud din Khilji ordered the execution of more than 30,000 Hindus after taking control over the fort.

It is also said that Khiliji captured the fort in an attempt to take Rani Padmini into his control. But this has been denied by many. After the fortress was sacked by Ala ud din, many Rajput women committed Jauhar when most of the warriors died defending the fort. Later a few years Ala ud din Khilji gave the control of the fort to his son Khizr Khan. Khizr Khan held the fort till 1311 AD. He named the fort as Khizrabad.

Khizr Khan was not in a position to withstand the continuous pressure of Rajputs. He was compelled to hand over the fort to Sonigra of Maldeva. He was under the control of the fort for the next seven years until Hammir Singh took control of the fort over Maldeva.

Hammir Singh was credited with having made the Mewar dynasty a prosperous kingdom. He was under the control of the fort until  his death 1378 AD. After the death of Hammir Singh, his son Ketra Singh, his grandson Lakha ruled for many years.

Finally in 1433 AD, Rana Kumbha took control of the fort. The Mewar dynasty flourished under his leadership from 1433 AD and 1468 AD. He built 32 forts including one in his own name called Kumbalgarh.

There was constant threat from various other rulers to take control of the fort. However, Rana Kumbha was killed by his own son, Rana Udaysimha. Udaysimha himself died in 1473. By March 1527, one of the descendants of Rana Udaysimha was defeated in a Battle of Babar.

The Mewar dynasty started to lose its sheen and was becoming weak.  Sangram Singh in 1509 became the ruler of Mewar.  Taking advantage of this Bahadur Shah of Muzaffarid dynasty took control of the fort in 1535. Again, there was a lot of massacres and Jauhar.

Sangram Singh or Rana Sanga was a very ambitious ruler. He was the youngest son of Rana Raimal. He ascended the throne in 1509 after a fierce battle with his brothers. It is believed that Rajput power reached its peak under his leadership.

Rana Sanga fought many battles with Muslim Kingdoms. The most noted one is the Battle of Khatoli with the Lodi Dynasty.  Rana Sanga fought another battle with Ibrahim Lodi known as Battle of Dholpur, where the Rajput won the battle.

He united many Rajput kings after the second battle of Tarain and moved further towards Timurid’s ruler Babur. Babur described Sanga as one of the greatest Hindu rulers along with Krishna Devaraya of Vijayanagara Empire. Sanga had extended his power from Satluj in Punjab in the North till Narmada River in South in Malwa. He entered Gujarat with 50,000 soldiers and defeated the Gujarat Sultanate.

Even though Sanga had many successes, it could not sustain for a longer period. He was defeated at Khanwa through the use of Timurid’s use of gunpowder. Rana Sanga was taken away from the battlefield by Prithviraj Singh I of Jaipur and Maldeo Rathore of Marwar.

Sanga regained consciousness and took an oath that he would return to Chittorgarh only after defeating Babur. But his own nobles poisoned him when Sanga was preparing war against Babur.  He died in Kalpi in 1528.

This was the final siege of the fort which happened in 1567. It was led by the Mughal Emperor Akbar. Akbar wanted to conquer the fort as it could make it easy access for Gujarat port and so he could establish trade routes. It started in 1567 and after several months of fierce fighting the Mughals were able to siege Chittorgarh fort.

Udai Singh II fled the fort and went to Aravalli hills along with his family. He left the fort under the control of Jaimal Rathore and Patta along with 8,000 soldiers and 1,000 musketeers. After a fierce fight for four months. Jaimal died in 1568 by a musket shot fired by Akbar himself.

The fort was again captured by Akbar on the day of Holi in 1568. After this Akbar ordered the massacre of people of Chittor in which 30,000 Hindus were brutally killed.

In 1616 there was a treaty between Mughal ruler Jehangir and Amar Singh. The fort was given back to Amar Singh by Jehangir.

This massive fort has seven gates which is known as Pol, in local language.  These gates were built mainly for security purposes. The gates are Padan Pol, Ganesh Pol, Laxman Pol, Bhairon Pol and the main gate is the Ram Pol. The upper portion of the gate has pointed arches and are built in stones.

The top of the gates has notched parapets which would help archers to shoot at the enemy. A common circular path inside the Chittorgarh fort links all the gates and also one can have access to many other monuments within the fort. All the gates have their own historical importance.

There is a very important water reservoir towards the left of Suraj Pol. It is believed that Prince Bagh Singh was killed near Padan Pol during the siege of 1535. There is another gate called Jorla Pol where in the upper arch of Jorla Pol is joined to the base of Lakshman Pol.

Boundary and Architecture of the Fort

The fort, which spreads across an area of 700 acres, looks like the shape of a fish.  The circumference of the Chittorgarh fort covers an area of 13 km. There are seven stone gates which are huge and massive to safeguard the fort.

One can reach the fort after crossing the limestone bridge over Gambhiri River. The ascent to the fort is through the seven gates which were built by Mewar King Rana Kumbha during 1433-1468 of Sisodia clan.

The fort has around 65 historical structures which include 4 palaces, 19 main temples, 4 memorials and 20 functional water bodies. These structures can be divided into two phases, one with a main entrance during the 5th century and continued till it was completely fortified by the 12th century. The second phase was in the 15th century during the Sisodia Rajput's period. 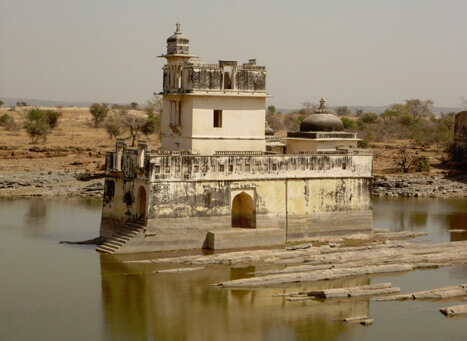 During this time the main royal entrance was relocated and fortified with seven gates. With massive seven gates and hexagonal and octagonal towers the entrance to the narrow path which climbs into the steep hill.

Between the second and the third gate there are cenotaphs which were built to honor Jaimull and Patta. The tower of the fort is nine storeyed and is beautified with sculptures of Hindu Gods and also from the stories of Ramayana and Mahabharata.

Places to Visit at Chittorgarh Fort 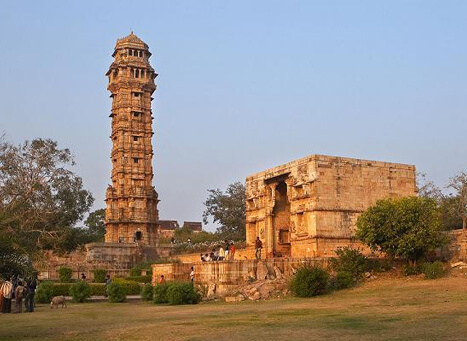 It is also known as the tower of victory and was built by Rana Kumbha to commemorate the victory over the rulers of Malwa and Gujarat in 1440. It was erected between 1458 and 1468. It is dedicated to Lord Vishnu. The Stambha is illuminated every evening so that we get a beautiful view of Chittorgarh. Next to Vijaya stambha is the Rana kumbha’s Palace which is in ruins now. This is also the palace where Rani Padmini committed Jauhar.

Also known as the Tower of Fame, it is a 22m tower built in the 12th century. It is dedicated to Adinath and was built by Bhagerwal Jain merchant Jijaji Rathod.

Just beside the Rana Kumbha Palace is the Fateh Prakash Palace. It was built by Rana Fateh Singh. It is built in Rajput style of architecture. 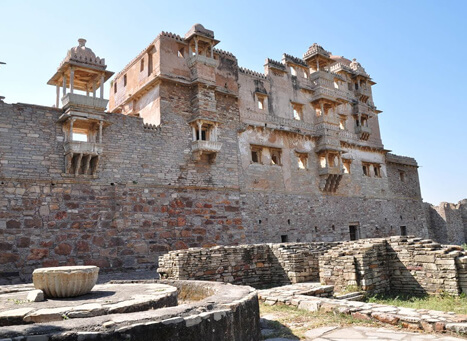 Other than these some of the other places to visit in the Chittorgarh fort are Gaumukh Reservoir which is a spring feed. There is also Padmini Palace next to this palace is the Kalika Mata temple. Earlier the temple was dedicated to Sun God, later it was rebuilt and dedicated to Goddess Kali. There is another temple towards the west of the fort which is Goddess Tulija Bhavani temple built by Mewar king Banvir.

Climate and best time to Visit

Chittorgarh experiences dry weather conditions. The best time to visit the place is from September to March when the weather is pleasant.

Monsoon season: The place experiences less to scattered rainfall from July to September. The maximum temperature hovers around 35 degrees Celsius.

Winter season: Winter months are from November to February. The minimum temperature may hover around 10 degrees Celsius. The weather remains pleasant and cold during this period.

Chittorgarh is easily accessible through road, rail and air.

By air: The nearest airport is the Dabok airport at Udaipur. It is located at around 90 kms from Chittorgarh. Udaipur airport is well connected from the major cities of India. From here one can take a cab or a taxi to drive down to Chittorgarh.

By rail:  Chittorgarh is well connected through trains. The city has train service from most of the major cities of India and within Rajasthan like Mysore, Delhi, Udaipur, Jaipur, Jodhpur, Kota and many more places.

By road: The city of Chittorgarh is well connected through road. It has bus services from the major cities like Delhi, Mount Abu, Ajmer. The golden quadrilateral highway passes through Chittorgarh, connecting it to different parts of India. Chittorgarh is on the National Highway 76 and 79