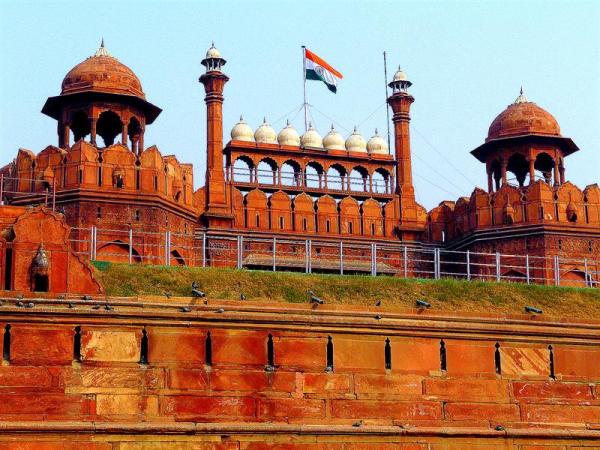 Open: All days except Monday. Red Fort is closed on Mondays

Red Fort is also known as Lal Qila is one of the spectacular fort built by Shah Jahan on the Banks of River Yamuna at Delhi India. It took nearly 8 years and 10 months to build this huge massive fort which is world famous even to this day.

Red fort at Delhi was built by Shah Jahan as the palace for his fortified capital Shahjahanbad in the year 1648. When Shahjahan decided to move his capital from Agra to Delhi, he constructed the Red fort. It is currently located in the national capital of India, Delhi. Delhi has many more tourist attractions like Qutb Minar, Jantar Mantar, Humuyun tomb, Jamma Masjid, India Gate, Rashtrapati Bhavan, Delhi Haat and many more. Delhi was the capital for Mughals and Delhi Sultanate. Delhi (Indraprasta) was believed to be the capital of Pandavas. Being one of the oldest cities, Delhi has a character of its own and has something for everyone. One of the main attractions in Delhi is Red Fort, from where Prime Minister of India hoists flag during every Independence Day. In 2007 the fort was declared as world Heritage site. The Prime Minister of India Hoist the tri colour Flag and give speech to citizens of India on the Independence day ( 15th August) 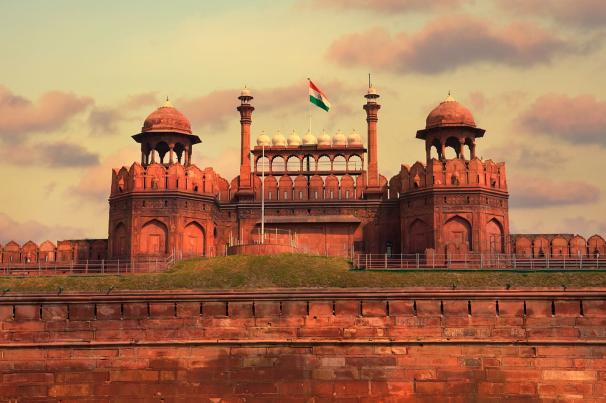 Red Fort is one of the greatest monuments built by Mughals.  The credit for the construction of this Fort goes to Ustad Ahmad Lahauri who is also the master mind behind the construction of Taj Mahal.  Constructed with red and white stone which was the favourite colour of Shahjahan on the banks of river Yamuna, Red fort is a mammoth construction which took a decade to build it (1638-1648).

When Shahjahan shifted his capital from Agra to Delhi, Shahjahan built a city called Shahjahanbad. To fortify this city, very huge wall was constructed all around this city which is known as Red fort. The wall of the fort is built by red sandstone with 2.5 meters width and a height of 33 meters.  The area encompassed by Red fort is ~ 2500 acres (~100 Ha). The massive wall is built around the fort to protect the city from attacks and to take care of its subjects. Later Aurangzeb added pearl mosque to the emperor’s private quarters and also built barbicans at the two main entrance of the fort.

The fort remained the residence of the Mughals until 1857 for nearly 200years. The Mughal dynasty became weak after the death of Aurangzeb. Jahandhar Shah took control on Red Fort in the year 1712 and with in a year of his ruling he was murdered by Farrukhsiyar. During the reign of the ninth Mughal ruler Farrukhsiyar the silver ceiling of the Rang Mahal in the fort was replaced by copper in order to raise money for the administration purpose. This was probably the beginning of the fall of Mughals. Again in 1739 Nadir Shah who was the Persian emperor destroyed and ransacked the red Fort including the Peacock throne which served as a royal throne of Mughals. The Persian emperor left the ransacked and destroyed city under the weak Mughal emperor Muhammed Shah.

The Mughals who were so weak now had no other choice but to sign a treaty with Marathas in the year 1752 which promised to protect both the city and the throne in Delhi. In 1760 Ahmed Shah Durrani threatened to attack and capture Delhi, the Marathas had no choice but to remove the silver ceiling of Diwan I Khas to raise fund for defence and to strengthen the army. Ahmed Shah Durrani defeated the Mughals in the third Battle of Panipat and took control over the fort. Later after ten years Shah Alam recaptured the fort with the support of Marathas. In1788 the Marathas took control on fort and ruled over Delhi and other parts of North India for nearly 20 years until the British defeated the Maratha in the Second Anglo Maratha war in the year 1803.

The second Anglo Maratha war ended the Maratha rule on the city and fort. British took control over the administration of the Mughals and also kept a permanent member in the fort to look into the administrative matters. During Indian Rebellion of 1857 the last ruler of the Mughals Bahadur Shah II was arrested by the British when he was failed in his rebel against the British. He was later exiled to Rangoon. With him the Mughal empire came to end and the British got free hands to loot and ransack Red Fort and the valuables of the fort.

Most of the furniture’s the Harem apartments; the servant quarters were all destroyed and looted. The gardens were also destroyed and many priceless possessions like the Koh-I-Noor Diamond, the jade wine cup of Shah Jahan and the crown of Bahadur Shah II were looted and sent to British government. They are still in London. Various requests from the Indian government to return back have been rejected by the British government.

The master mind behind the construction of Red Fort is Ustad Ahmed Lahauri. The fort is Octagonal in shape with the North South axis longer than the east west axis. Red Fort was famous for the ornaments, gardens and the water channel. Kohinoor diamond is an example of the rich ornaments that was used to beautify and decorate the Fort. Unfortunately the British have destroyed most part of the fort. The main entrance of the fort that is the Lahori gate opens at Chatta Chowk. The Lahori and the Delhi gate were used by the public and Khizrabad gate was for the emperor. The Lahori gate is the main entrance which opens to the covered bazaar known as Chatta Chowk. 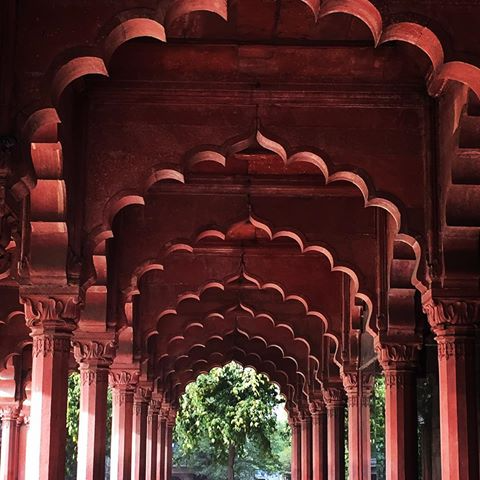 Diwan-I- aam: Diwan-I- aam also called as Hall of audience is located inside Red fort.  The hall consists of front hall which is open on 3 sides backed by many set of rooms built by red sandstone. The pillars of Diwan -I- aam has paintings by artisans from Rajasthan and precious stone embedded on it. The Diwan -I- aam was built by white marble bought from Rajasthan. From the Southern side of this palace royal ladies used to sit and watch the proceedings. 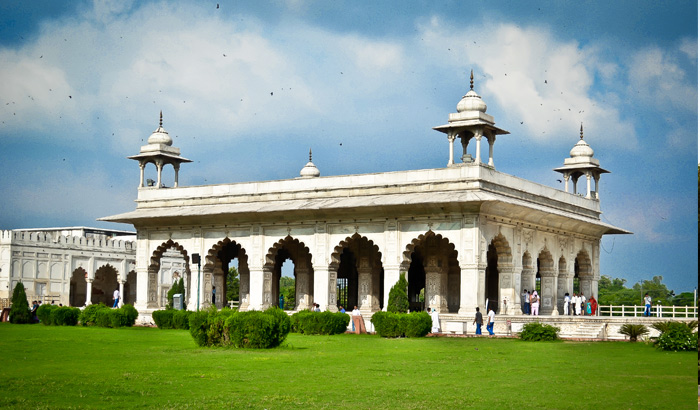 Diwan -I- khas: Diwan -I- khas also known as hall of private audience was exclusively used for private Durbar. This was attended only by important ministers and army chiefs where important decisions were taken. The centre of Diwan -I- Khas had peacock throne. Even the walls of Diwan -I- khaas had special gems and stones laid on it.  Later this throne was plundered by Nadir Shah from Persia in 1739.

Lahori gate: The Lahori gate is the main entrance of the Red fort. Every year Prime Minister of India hoist flag and gives speech on Independence Day from this gate. 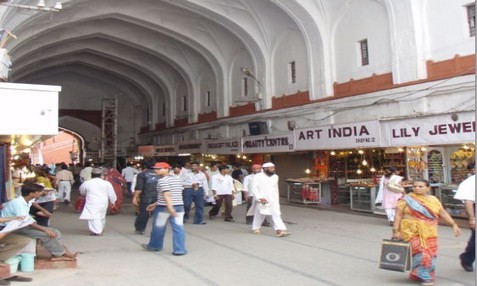 Chhata Chowk: It is a long passage inside the Red Fort which contains market in it. It is located behind Lahori gate and contains 32 arches which serve as shops. Chhatta Chowk in English means ‘covered market' 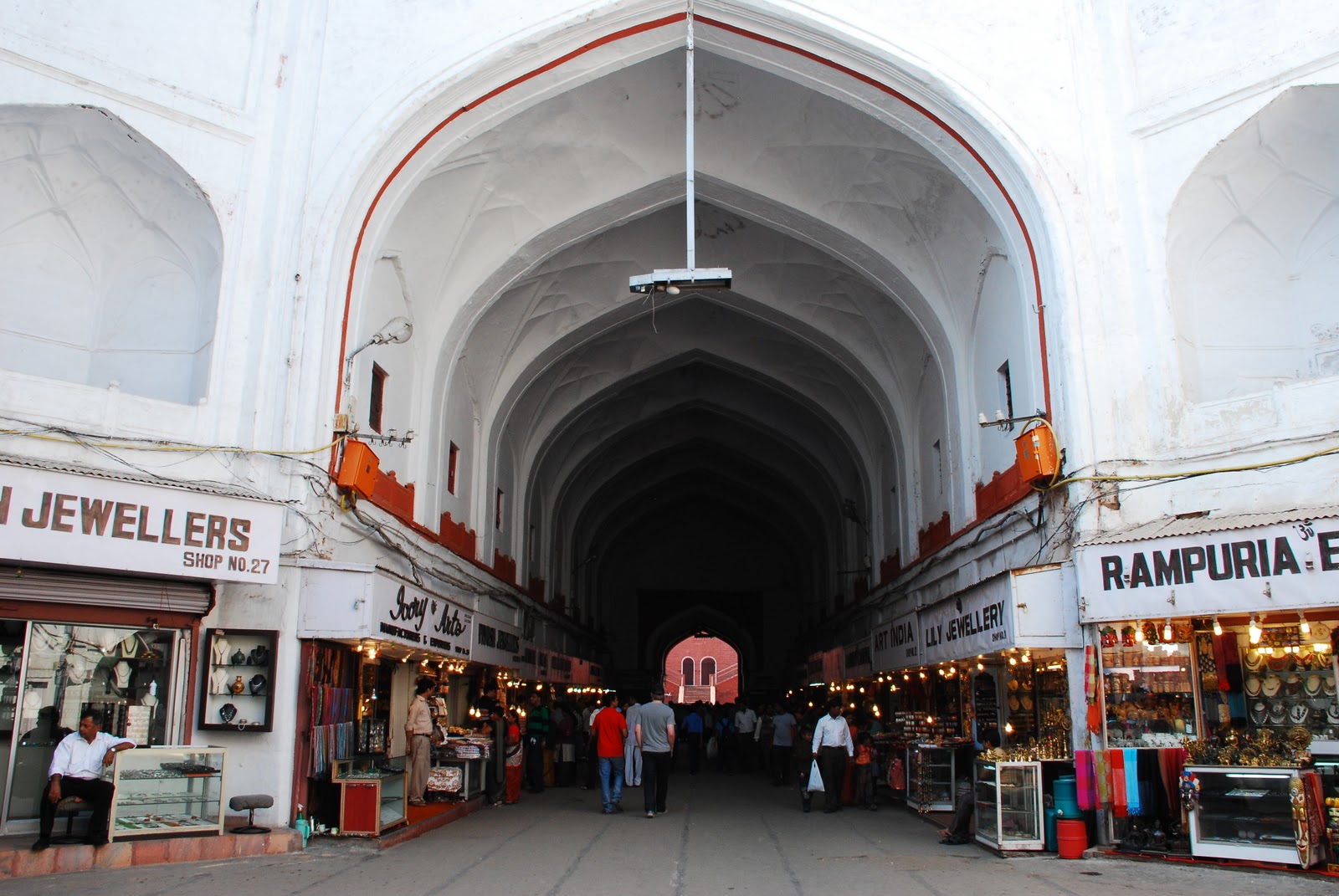 Naubhat Khana: Also known as Drum House it is situated between inner and outer court at Red Fort. Musicians used to announce the arrival of Kings to Diwan i aam. Music used to play 5 times in a day. 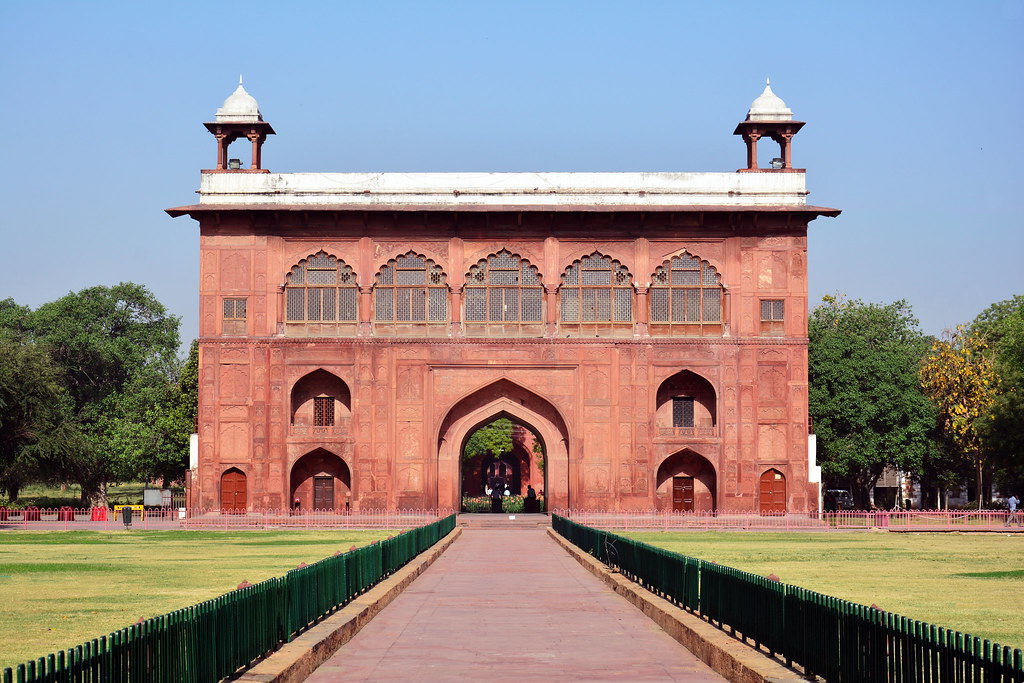 Hayat bakhsh bagh: This is one of the biggest garden of the Red Fort. The garden is divided into four squares with water channels. 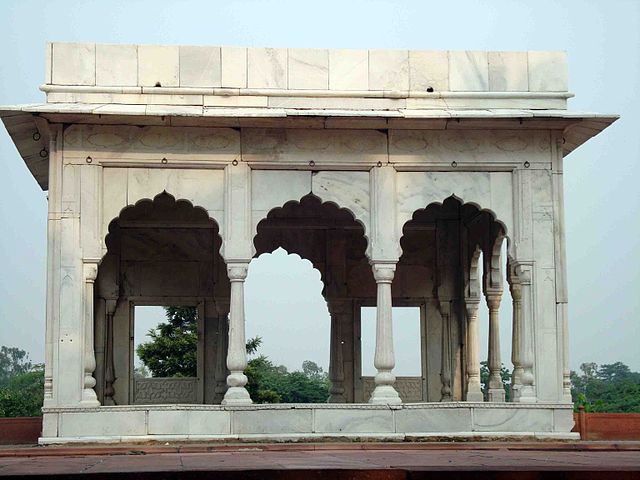 Hira Mahal: Located in the eastern wall of the Fort, it is the Pavilion of the Red Fort. This was built during Bahadur Shah 2 period. 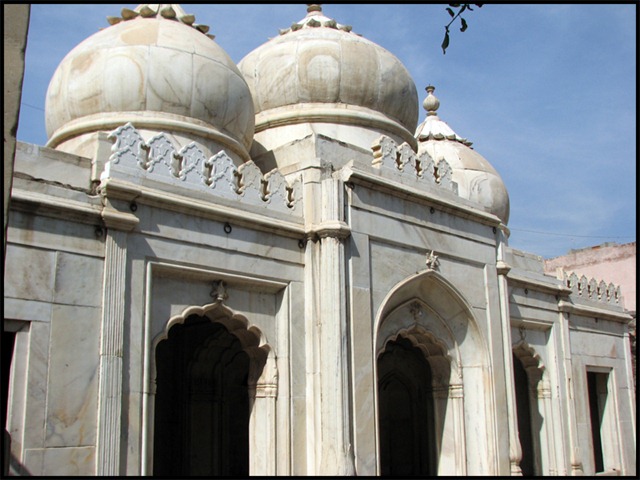 Moti Mosque:  This is a mosque inside Red Fort. It means pearl mosque. This was built by Aurangzeb for is personal use. The prayer Hall has 3 arches and divided into 2 Aisles. 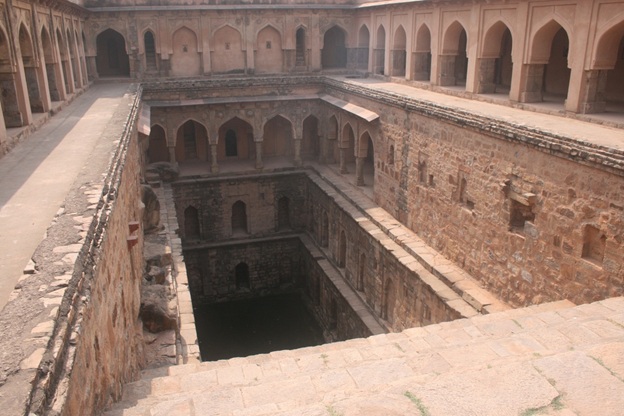 Baoli: Red Fort Baoli is uniquely designed with two sets of staircases in the step well that lead down to the well. This is not destroyed by the British. It was used as the prison in the India Rebillion act of 1857. The two sets of the steps meet at a right angle. 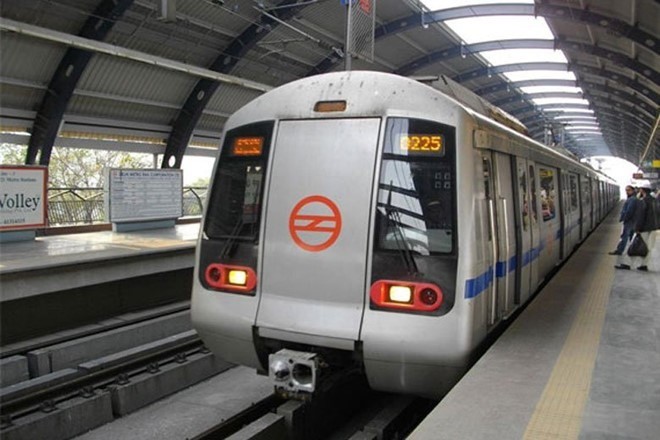 Tourists can reach Delhi either by air, road or rail. To reach Red Metro the nearest metro station is  Chandni Chowk which is yellow line. It is just 2 km away from the Red Fort. One can also take local buses, taxis and Rickshaws to reach the Red Fort. After coming out from the gate 5 of the metro station one can take a rickshaw to reach the place.