The Elephant and the Jackal

The Elephant and the Jackal

Hitopadesha tales are short stories with good morals to understand and implement in life.  It can be Panchatantra or Jataka tales or Hitopadesha tales, there is so much to learn from each story. This story tells us arrogance and tyrannical life would come to an end sooner or later.

Once upon a time there lived an elephant by name Karpurathilaka in a dense forest. Even though elephants have huge bodies, it is considered comparatively mild as compared to other wild elephants. But Karpurthilaka was brutal and cruel towards other animals. 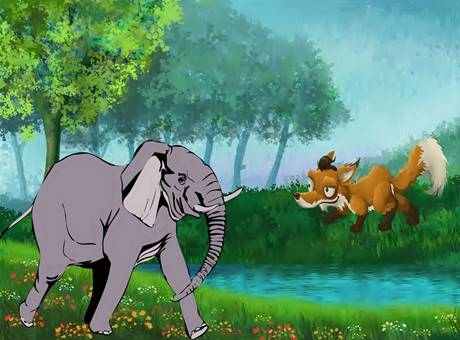 He used to trouble other animals and also break and cut  the trees and ripped the branches for no reason. Due to this many nests which had eggs were destroyed.

All birds and  animals including strong animals like tiger, lion were worried and did not trouble him. Everyone wanted to get rid of him.

One day due to his unreasonable behavior the elephant destroyed the burrows of the jackal. This angered the Jackals and decided to take revenge on him and kill the elephant.

The elephant and the jackal

The jackals held a meeting to decide for further course of action against the elephant. But the Jackals knew that it is not an easy task to kill a huge lion. After having a long discussion they could not come to any conclusion.

At that time an old jackal stood up and said, Trust me and leave this problem to me. '' I will cleverly bring him to death.” Everyone was happy and agreed with the old Jackal.

The next morning as planned the old jackal set out for his mission. The old jackal went near Karpurathilaka and kneeled down in front of the elephant. The old Jackal said to the elephant, “ My lord please look at me.”

The arrogant elephant gave a stern look at the jackal and said , “ who are you? and why have you come to me?” The old jackal who had a perfect plan said to the elephant, “ My lord, I am a poor jackal.

You are the largest and bravest in the forest. You are also very kind hearted and gentle towards your peers. All animals in the forest have decided to make you the king of the forest. I am here as a messenger and request you to accept the offer.”

The elephant was very happy to hear such good words about him. Jackal further said, “ My lord all animals are waiting to see your kingship ceremony. Please accept the offer and come with me. It will be held at the centre of the forest. I believe according to our astrologers it is the most auspicious time to take charge as king.”

Jackal said, “ No one is going to save you. You deserve this for your arrogance and cruel behaviour. You killed so many eggs and babies of all other animals. You spoiled our burrows and nests of many birds. You deserve this punishment. I am sorry to say that I will not help.” So the jackal moved out towards his place. The elephant died in the swamp while shouting for help.